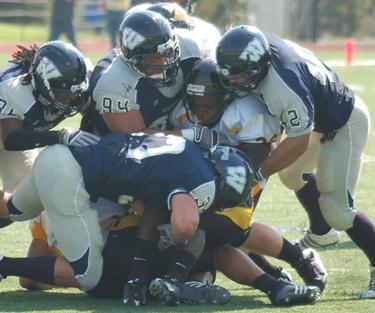 A week after making big defensive stops against Missouri Western, the Ichabods went on the road and held Missouri Southern scoreless in a 23-0 win.

For the first time in 46 games, the Washburn Ichabods recorded when shut out Saturday in Joplin, Mo. as they beat the Lions of Missouri Southern State University 23-0.

After narrowly escaping defeat last week against Missouri Western State University, the Ichabods were looking for a solid win, but it would not come easily because quarterback Jake Iverson was sacked four times, and the Ichabod offense failed to score a touchdown until late in the fourth quarter, when Justin Cooper ran the ball in from the 16.

“It’s frustrating, we seem to take two steps forward and one step back,” said coach Craig Schurig about the offense’s inability to sustain drives. “We want to build on our defense and the things that we already do well, and then our consistency on offense as far as developing our passing game.

“But when we have consistency on offense, then we can make other teams try and do something with their offense.”

The Washburn defense had a strong showing, scoring touchdowns on a pair of interceptions. The first came from former receiver-turned-linebacker Brad Cole, who went 30 yards the other way after picking off Missouri Southern’s Adam Hinspeter in the second quarter.

Hinspeter was again picked off in the fourth quarter when Casey Curran snatched the ball and gobbled off 58 yards of real estate, putting another touchdown on the scoreboard for the Ichabods.

“I did a lot of work with the coaches,” said Cole, referring to his recent move to linebacker. “Michael Wilhoite and Curran helped me out a lot with the film and making sure I knew what I was doing and where I had to be.”

Cole moved to the defense last Tuesday from his wide receiver position because of injury issues that have hindered the team since the beginning of the season, but Cole said he is a team player and will play wherever the coaching staff asks him to.

“It feels good knowing (the shutout is) a defensive goal and being able to not only help out the defense, but the team as well,” said Cole.

Kicker Garrett Cummings added a pair of PATs and a field goal to round out Washburn’s scoring.

The Ichabods now sit at 4-2 (2-2 in the MIAA), and host rival Emporia State next weekend for WU’s homecoming game. Kickoff for the 105th meeting between the two teams is set for 1 p.m.