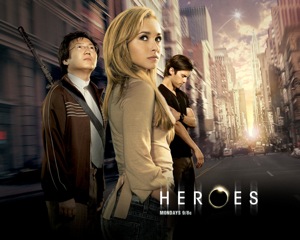 Tim Kring’s hit series on NBC, “Heroes,” has come a long way since its season one debut in 2006. Even despite the tragedy of turning season two’s intended hiatus into a “that’s all?” type of season two. Fans were outraged, they wanted more heroes, I wanted more heroes. Cutting the season off so early left many loose ends, and also left people worried whether the show was going to come back and finish what it started or if it was going to be canceled like countless others.

Those of you who are avid “Heroes” fans know that season three is into its fourth episode, airing tonight. Now, without spoiling anything for anyone who hasn’t seen these past few episodes, it’s safe to say that the plot, as complex as it may seem, is still along the same lines it has always been: Saving the world. One would think that theme would be exhausted by now, but the plot has evolved since one of its more memorable quotes from season one: “Save the cheerleader, save the world.”

It’s a common and almost crucial element in any superhero series or subgenre to stop the world from ending. In the case of “Heroes,” there isn’t one evil mastermind holding the world hostage, or a group of villains bent on world domination. Instead, there are a lot of complex layers and groupings of characters and the relationships between them that always leave viewers questioning who the bad guy really is. This has been apparent from the first few episodes of the first season, when viewers realized the man in the horn-rimmed glasses is the father of one of the token heroes, Claire the cheerleader.

Season three is titled “Heroes: Villains,” and appropriately so. The writers, who have all along played archetypal good guy/bad guy ping-pong with the audience, have really capitalized on this concept for this season, and appropriately so. We discovered something in last week’s episode, when the plot jumped four years into the future, where a token bad guy seemed to not be so bad any more, but the world is still set to end.

As to how our band of heroes or villains will save the world this season, the possibilities are infinite. Let’s hope for a full season this time around with more in-depth character development that ends in an appropriate way, instead of halfway into the season. We can be sure to expect something far beyond viral epidemics and nuclear explosions in this season.

Viewers should be sure to tune in for tonight’s episode, when they will finally meet one of the major villains who has been behind a lot of the mayhem.