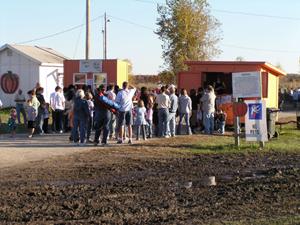 Gary’s Berries may not have much to offer by way of berries, but visitors will find lots to do in its large corn maze, haunted house, pumpkin patch and hay rack rides.

Gary’s Berries dates back to 1993, when Gary Starr began planting strawberries, raspberries and blackberries on his farm in Grantville. Every fall, Starr added more and more activities to his farm. He created the first corn maze back in 2000, and it quickly became a popular destination for Kansas families. Nowadays, the “Corn Maize” is standard autumn entertainment in Kansas.

Catherine Klein, 22, said she was surprised by the complexity of the maze.

“I thought I was going to have an easy time getting out of it, but actually it was very confusing,” said Klein. “It was a decent-sized maze. We ended up having to ask somebody how to get out of there.”

John Clark, 23, said he went to Gary’s Berries with his girlfriend around 10 p.m. on a Friday night, and he was surprised to see so many kids that late in the evening.

“There were kids running around everywhere all hopped up on sugar and candy,” said Clark. “The best part was making fun of the kids who were walking by, and misleading the mothers of the lost kids. They would call out for their kids, like, ‘Billy!’ and we would yell back, ‘What?'”

A haunted house, known as “Frightmare Farm,” has been a regular feature at Gary’s Berries since 2004. Klein said it looked like a lot of fun, but she decided not to go inside.

“That was the most popular thing there. We just weren’t in the mood to have people jump out at us and scare us,” she said.