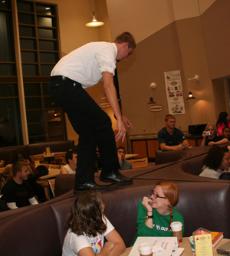 Happy feet Dave Hess displayed his exuberance for the competition by crawling on booths in the Union Market. While not christened the king, all runner-ups were compensated with gift certificates to Buffalo Wild Wings.

Men of Washburn University competed Wednesday for the title of Mr. Bod in Stauffer Commons of Memorial Union. The competition drew a crowd of students as the contestants tried to win over the judges to be crowned Mr. Bod of 2008-’09.

Organized by the Washburn Student Government Association, the Mr. Bod competition is an annual contest structured as a male beauty pageant, or more formally, scholarship program, as the winner receives $200.

Spectators Andrea Hale and Zach Morris were among the group of students seeking entertainment by the contestants.

“It’s pretty funny to see what all the different contestants come up with to try to win over the crowd and judges,” said Morris. “They come up with some crazy ideas.”

As WSGA senators, both Hale and Morris were glad to see the competition was successful.

“It’s a great event that WSGA puts on to encourage student involvement and school spirit,” said Hale. “The people in charge of organizing it worked really hard, and it’s fun to see students supporting their fellow students as they compete.”

Contestants for this year’s competition were Dave Hess, Blake Edwards, Brian Pasche, Blake Stephen Bryant and Phil Norris. Each competitor brought something unique and memorable to the competition, ranging from heartfelt country songs and instrumental solos to spirited attire and humorous autobiographies.

Although each contestant put up a worthy fight, only one would be named the winner and become Washburn’s next Mr. Bod. After much deliberation, the judges named Phil Norris this year’s winner and recipient of the $200 prize. The four runners-up received gift certificates to Buffalo Wild Wings for their efforts throughout the contest.

“The competition was tough this year,” said Maples. “There were a lot of good candidates. It really didn’t hit me how much I loved being Mr. Bod until I had to crown Mr. Phil Norris. It’s a fun event.”

With a large showing and eager participants, the 2008 Mr. Bod competition could be seen as a success, and at the very least a comedic time for all in attendance.