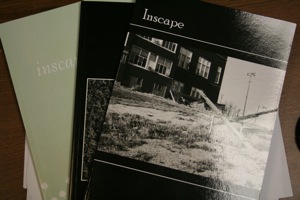 Inscape magazine, the campus literary magazine, is on its way to becoming a nationally read publication. The magazine is already receiving submissions from across the country, including one from a Washburn grad in California.

For more than 35 years, Inscape has been Washburn University’s foremost publication for quality literature, something the current staff wants others to know.

“It is a hidden gem of the university that people need to see,” said Huascar Medina, editor in chief of Inscape.

Inscape literary journal has been published since 1972. It publishes the best of submitted fiction, non-fiction and poetry. While Inscape has always been about publishing quality material, this year’s staff seeks to raise awareness of the journal.

“The editorial staff has gone to great lengths to spread the word about Inscape,” said Sarah Smarsh, assistant professor of English and Inscape faculty adviser.

In addition to plastering Washburn’s campus with fliers encouraging submissions, Inscape staff launched a Web site with the hope of drawing attention from across the nation and abroad. Also new this year is the option to submit electronically.

According to Medina, Inscape has seen an influx of submissions this year, with the majority coming from out of state and from other countries.

Inscape has already seen increased interest in the journal. According to Smarsh, a Washburn alum currently residing in Los Angeles recently contacted the English department to inquire about purchasing the most recent issue of Inscape. In the coming year, Inscape will be available to order through the university bookstore.

In recent years, Inscape has had a circulation of 200 to 300 copies. Medina hopes to see that number climb to 500, the circulation required for recognition by The Council of Literary Magazines and Presses.

Medina believes that the journal will reach its goal in a few short years, and will bring much prestige to the university.

“It draws attention to a university,” said Medina.

Smarsh wants to emphasize that students from all around campus are encouraged to submit their work to Inscape, no matter their major or career goals. She hopes to bring people into the fold who might be writers but have never considered getting their work published.

“Lots of people are writers at home,” said Smarsh.

Though Inscape provides writers from all walks of life an opportunity publish their work, Medina recognizes that it is especially important to students.

“Getting published as an undergrad is a great thing,” said Medina.

The deadline for submissions is Oct. 22. To visit Inscape’s Web site, go to http://inscape.wordpress.com.