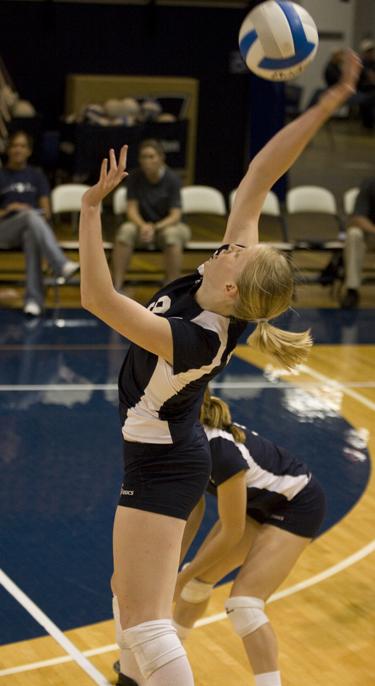 Caitlin Conley had one of the best performances of her WU career, making the Fall Classic all-tournament team.

It’s not often that the Washburn volleyball team gets four home games in a row. But that was the case this weekend for the Lady Blues Fall Classic, and the team took full advantage.

Finishing up the regular season portion of the non-conference schedule, the Lady Blues defeated East Central and Incarnate Word 3-0, while they beat No. 20 Midwestern State and Central Oklahoma 3-1.

The Lady Blues are now 6-0 at home this season, with eight more home contests remaining. And with only one loss at Lee Arena in the last two seasons, and just 12 since 2002, the Lady Blues enjoy the home cooking..

“The environment here is really good for us. The crowd is awesome,” said freshman right hitter Breanna Lewis. “It helps a lot to have a crowd come out and be cheering for us and be able to be loud and not just sit there and not say anything.”

The Lady Blues Tournament brought some of the best talent from the Midwest in the likes of No. 15 Truman State and No. 11 Emporia State, as well as a tough Midwestern State, who came in undefeated at 18-0.

But after all was said and done, the MIAA teams TSU and ESU were 4-0 while MSU was 1-3, showing just what kind of competition the MIAA conference brings.

“We have a really tough league. I like how when people come in and play us from the outside, it’s like welcome to the MIAA,” said sophomore outside hitter Ashley Shepard.

The tournament was set up so none of the MIAA teams played each other, but because the league competition is as tight as it is, every game that an MIAA team played in was an exciting one.

“It’s good to be able to scout and see what everyone does,” said Shepard, who joined Washburn’s Caitlin Conley on the all-tournament team. “That’s always a good thing. It just gets us ready for when actually we do have to play them. Like we have to play Emporia coming up, and we haven’t played Fort Hays either. It gave us a little glimpse ahead of what’s coming up, so we can maybe try to get ready.

“My sister plays for Emporia so I watched most of those games. We had a lot of free time in between our morning and night games so we always got to catch some of the action in between.”

Shepard’s sister, Arica, was named the Most Valuable Player of the weekend, racking up 45 kills, 44 digs and a hitting percentage of .364.

Another highlight of the weekend came Friday night when Washburn coach Chris Herron earned his 200th win against MSU. Herron is now 202-40 and has the highest win percentage in Washburn history at .835.

The Lady Blues will travel to Missouri Southern at 7 p.m. Wednesday in Joplin, Mo. before coming home for the weekend to play 7 p.m. Friday against Southwest Baptist and 5 p.m. Saturday against No. 16 Pittsburg State.