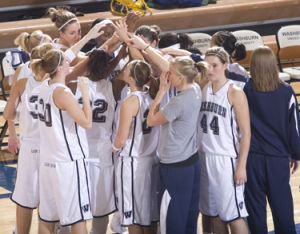 Coming off a 26-7 season and a trip to the Elite Eight, the Washburn Lady Blues look to build on last season’s achievements and put together a repeat performance. Although these lofty goals have become yearly expectations, the Lady Blues will have to work hard to replace last year’s seniors Corkey Stiger and Amanda Holmes.

“When you lose those two punches inside and outside you’re going to take some lumps,” said coach Ron McHenry about the loss of Stiger and Holmes.” We’re really trying to focus on having some people step up in those areas. It was pretty good one two combo we had to replace.”

Coming into the 2008 season, the Lady Blues hold the top spot in the conference and are ranked No. 3 in the nation behind California, University of Pennsylvania and Northern Kentucky University, the team has become quite used to the hot pursuit from other teams.

“I definitely think it puts a target on our back,” said Brette Ulsaker, junior guard. “I think that teams are going to play us like we’re the Washburn Lady Blues and we shouldn’t take that for granted.”

Ulsaker’s teammate Renata Germano knows just as well the Lady Blues aren’t a team others will take all too lightly.

McHenry agrees with his players and thinks that some of them like the challenge of being in the top spot with others gunning for the position.”There’s no doubt, they’re looked at to do certain things and some of them have been here a long time and they always had that target,” said McHenry.

“I think that’s why some people come here is to be challenged like that.”

Aside from having to watch out for sleeper opponents, as well as in-conference rivals, the Lady Blues have to find those willing to step out from the lime light and into the leadership roles. For McHenry, he looks to his seniors.

“The seniors, you always hope that they’re the ones that will take charge of their team,” said McHenry. “It’s their last year, they lead and the rest of the team is determined to make it a great year for them. That’s always kind of how it’s worked here. Mainz is always one of the leaders but we have some others that are stepping up. Janice Bright is trying to be a leader and it’s kind of a new role for her, Kalee (Silovsky), we have a bunch of seniors and it’s their year and it’s their job to get us going in the right direction and it’s the young kid’s job to make sure they have a great year.”

Germano looks to one of her other teammate to step into one of the leadership roles.

“Karla (Tailele), she’s the fire. She really pushes us and she’s one of those people that’s coming forward as a leader,” Germano said.

McHenry applauds his team’s efforts to become leaders and their attitudes before the start of the regular season.

“We have a good group of seniors this year and there’s a process of them coming out and becoming leaders,” he said. “Last year they would come out and the seniors would lead them, now they have to come out, play well and lead the team. The veterans coming back, they understand the standards and expectations of this program and where we went to last year. And they look at it as they should go there, and they look back at it as they’re supposed to go there. And if you have that belief that you’re supposed to do something like that, there’s a good chance you’ll do it.”

Only time will tell for the Lady Blues if their hard work will lead them back to the national tournament or if the opposition is too great a deep tournament run becomes just a dream.