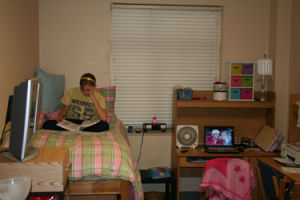 Recent numbers released by Washburn University show enrollment has dropped yet again, down 5 percent from where it was last year at this time.

Kirk Haskins, director of admissions and Tom Ellis, interim dean of enrollment, said many contributing factors have led to the drop-off in enrollment. The economy, fewer graduating high school seniors and the retention of students are among several factors that played a role in the decrease in students attending Washburn this fall.

“Economically speaking, these are challenging times, but they are also great times too,” said Haskins. We can assess why we do what we do and how we can make it better, building off our strong points and foundations we already have in place.”

The stable population of Topeka is a contributing factor to the dropping enrollment. While the city has remained stagnant, the number of elderly individuals greatly outweighs the number of high school and college level individuals.

“If you saw Topeka’s population increasing even 1.5-2.0 percent, you could expect it would make an impact on Washburn,” said Ellis. “The problem is though, for the last 30 years or so, the population only increases about 0.5 percent a year.”

The problem, Ellis and Haskins both agree, is in the retention of students. The number of students living on campus is up about 5 percent this year, with an 8 percent increase of students who reside in the Living Learning Center, said Kate McCown, assistant director of residential living. These numbers also state that the amount of freshmen enrolled at Washburn is up about 4 percent from last year. The problem for the university is the number of transfer students is down this year, and not as many students who were at Washburn last year stayed as in previous years.

“Retention is such a complex concept because it can have to do with finances, academic performance, and maturity of the individual, among other reasons,” said Ellis. “But the fact remains, we want high retention levels and that’s an issue we’re having right now.”

Getting the word out about Washburn is a factor that is currently improving. While the numbers for recruitment letters formally was at 30,000-40,000 individuals, numbers have now increased to nearly 75,000 in hopes that a percentage of those will reach people who find Washburn appealing. The current average student return is about 2 percent for the letters sent out.

“We have to make sure we’re doing the best job possible of making sure students know that Washburn could be the place for them,” said Ellis. “We want to make sure we give students the opportunity to select us.”

Haskins also commented on the advertisement of the school.

“We need to make sure we keep our message fresh because what got us here will not get us there,” said Haskins.

There will be no dramatic increase in funds to help the enrollment, though. Funding will stay steady for the university, but the way they are implemented may be a point of controlling enrollment. Different funds on campus have and will begin to be used more efficiently, allowing for more leeway in other portions of recruitment of students to the university.

Surprising numbers, though, show involvement in student organizations and in fraternities and sororities increased this year. While the numbers aren’t official at this point, preliminary findings show Greek Life involvement has almost doubled this year.

“Our hope is that students will find their niche, and hopefully knowing that there’s a place at Washburn to belong, even if you have to create it yourself,” said Marsha Carrasco Cooper, director of Student Activities and Greek Life.

Washburn has called on outside sources to help fix the problem. There is a consultant currently studying and assessing information of Washburn regarding the drop in enrollment. Progress reports are due in mid-November. But the process is ongoing and may not be completed for a few years. Officials hope the end result will be to bring more students to Washburn and keep students once they’re at the university.

“My hope is that enrollment will gradually increase after this year, and that’s truly what I believe will happen,” said Ellis. “Every university has its ups and downs and this was just a point we have to get through.”