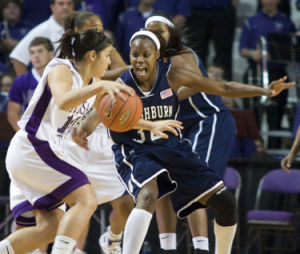 In both of Washburn’s exhibition games against in-state Division I competition, the Lady Blues were within striking distance of an upset in the second half.

Nov. 2, WU was behind by just four at Kansas State before allowing the Wildcats to go on a 14-1 run that spanned more than eight minutes in a 66-47 loss.

Sunday at Kansas, the Blues had a similar downfall, pulling within two points of the Jayhawks at the eight minute mark, only to allow a 17-2 run and lose 67-51.

The Blues were clearly prepared for the challenge of road games in big-time college basketball environments, but in both games it appeared the team wore down in the home stretch.

Though the Lady Blues were off to a strong start matching KU almost point-for-point in the first half, the two teams combined for 20 fouls with three minutes left in the half. Despite going 9-for-29 in field goals, the Blues remained tied with KU 28-28 at halftime. The second half would prove to be a turning point in the game as KU would go on a 9-0 run coming out of half, a deficit the Blues tried valiantly to overcome, slashing the Jayhawk lead and narrowly missing shots to regain the lead.

“When we came out of the locker room after half we knew they were going to be physical and go hard just like they did in the first half,” said Bright.

After the game, the Blues chalked the loss up to a lack of organization.

Bright agreed with her teammate and also pointed to a simple fundamental flaw.

“We have to box-out and rebound,” said Bright. “We can’t let teams out rebound us, we have to crash the board. Today they got us on a lot of second hand shots.”

Coach McHenry, however, knew with the player shifts that had been made in the off-season that the lack of organization would be a factor going into Sunday’s game.

“We have a lot of new kids, and understanding the system that’s a deficiency we knew we had,” said McHenry.

Senior forward Stanecia Graham lead the Blues in scoring with 12, and Bright had 10 points with six rebounds. The Lady Blues shot 18 of 54 from the field and went 13 of 16 from the line.

The Blues play host to their friendly rival the Washburn Ichabod Golf team in an exhibition matchup Friday at 7 p.m. in Lee Arena.