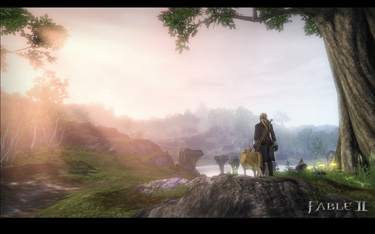 People review games all the time. But after a game has been out for a bit; do we ever get anyone’s afterthoughts? Well I did. I went to find Washburn students who had played Fable II and asked them what they thought of its storyline end. Most of the people had similar things to say. Almost everybody agreed that the game is, well, awesome. Many commented on the success of the game to build on the history of Fable I, like Robert Hanson.

“The history in game is rich and creates a wonderful fantasy world,” said Hanson.

Hanson only had one criticism with the game.

“The only problem I had with the game is that many of the world’s ‘bosses’ were very simple, and there were not very many.” Though this may be true and we could discuss whether a game really needs an “endgame,” many people think that the hours of game play available after the game actually ends is a faucet of Fable II that not many other role-playing style games have. In fact, student Jason Wages is one of those that feel this way.

“Not since Oblivion has a video game presented such a wide open world with near endless hours of play,” said Wages.

For my view: I didn’t meet one person who disliked this game, and everyone had one good thing (if not more) to say about it, and I can’t disagree with them. You can play this game from the beginning five or six times and end up with a completely different character and story. So if you like the world of RPG gaming, my fellow gamers and I suggest that you do not skip past Fable II. It is a game that 99 percent of you will really enjoy.