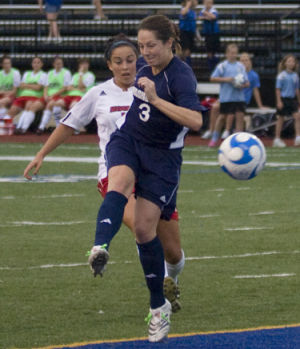 In the past few years, the NCAA tournament has been rough for the Lady Blues soccer team, which lost shootouts in its first two appearances.

However, Friday night in Canyon, Texas, the No. 3-seeded Washburn women ended their winless postseason streak when they beat No. 6 West Texas A&M, 2-1, in double overtime of the first round of the NCAA Division II playoffs.

The winning goal, senior forward Manon Englehardt’s third of the year, came 47 seconds into the second overtime off an assist by Danielle Ayala from four yards out.

“It feels really good,” said Englehardt. “A lot of girls never get to experience this so I’m glad we got the chance. It’s really exciting.”

Washburn was over-matched in the first half as it was against the wind. WTAM out-shot the Lady Blues 6-0 while attempting nine corner kicks compared to Washburn’s none. The offensive advantage paid off for the Lady Buffs as they struck first in the 34th minute off a free kick goal by Kayla Sisco from Adi Stein.

“It was deplorable conditions,” said coach Tim Collins. “Wind gusts up to 45 miles per hour. A little bit of a dodgy call by the referee, and we gave up a free kick with about 10 minutes left to go in the half. But 1-0 with that wind is not a bad result.”

During the second half, the Lady Blues went with the wind and out-shot the Lady Buffs 13-1 and had a 4-1 advantage in corner kicks.

But the extra chances didn’t pay off.

“In the second half, we didn’t really play to the best of our ability,” said Collins. “We were fortunate to get a goal.”

Ashley Taylor, junior, tied the score in the 79th minute with an assist by Kaydi Hooker. It was the seventh goal of the season for Taylor.

The first sudden death overtime resulted in a scoreless period during which WTAM out-shot Washburn 2-1.

“We [went] against the wind in the first overtime, dodged a couple of bullets,” said Collins.

The Lady Blues had the wind in the second overtime and the rest is history.

“It’s really important not to panic,” said Taylor. “We knew coming out, going against the wind, if we could it keep it 0-0, we’d have a chance when we had the wind at our back. It worked out.”

Ashley Klone was the winning goalkeeper for the Lady Blues with four saves.

The Lady Blues victory moved them to 15-6-2, tying the school record for wins in a season.

The team was unable to break the record after falling 1-0 to Truman State in the second round.

Ten minutes into the match, the Bulldogs scored the eventual game-winner in another windy, dirt-field setting.

While the loss is disappointing, the season was not for the team or its players, especially the seven seniors who leave Washburn with several awards.

“Lisa is a real anchor on defense and Jess is real good up top and is a great motivator,” said Taylor. “They’re both important parts of our team.”

Fahey and Mainz were also named to the All-MIAA Women Soccer first team on Wednesday. It is the fourth time Mainz has earned first team honors, and the second time for Fahey.

The Lady Blues, with seven seniors, hope to keep their NCAA dreams alive and play as long as possible.

“We want to keep going as far as we can for the seniors,” said Taylor. “Every game could be the last one that they play soccer. So they’re all important.”