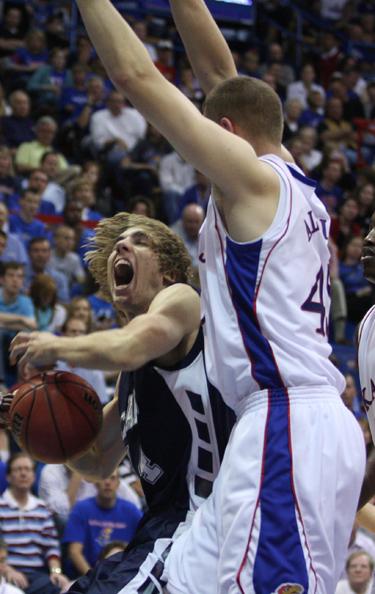 Forward Logan Stutz and the Bods found it difficult to compete for 40 minutes against Kansas and K-State, but expect to see close games in the MIAA.

Entering Allen Fieldhouse for an exhibition game against the defending national champions, and Bramlage Coliseum – the home of a second round tournament team, – could be considered intimidating to a young roster filled with newcomers.

But for a pair of transfers from Arkansas-Little Rock, the Division I experience was business as usual.

If anything, the newcomers preferred the increased difficulty.

Less than one minute into the game, UALR transfer Lekheythan Malone sank two free throws and quieted the Allen Fieldhouse crowd, putting a finger to his mouth as if to say, “Shhh.”

Seven minutes later, a three from Malone kept the Bods within two.

“I’m not intimidated to play here,” said Malone of Allen Fieldhouse. “They’re intimidated by me.”

However, 11 points from Malone and 13 from fellow transfer DeAndre Eggins were not near enough, and WU was down by 22 at halftime en route to a 98-79 loss.

The Ichabods looked to bounce back with a win in Manhattan last night, but suffered a similar result, losing 81-57 to the Wildcats.

The first half was sloppy for both teams, and the Ichabods committed 18 fouls while only scoring 24 points and making five field goals. Still, they were only down 12 at the half, despite 18.5 percent shooting and getting out rebounded 33-16.

“We missed some real easy ones early in that game and then it kind of snowballed for us,” said coach Bob Chipman. “They were shooting poor from the free throw line and when you do that you’re kind of afraid to take it strong inside because you really don’t want to get fouled and go to the line.”

K-State opened up their lead in the second half, outscoring the Ichabods 45-33. While both teams shot better, the rough play continued. Four Washburn players, including three starters, had four fouls before the 15:41 mark in the second half, giving them plenty of extra time on the bench while others got playing time.

“I’m not going to complain that much about the refs,” said senior Paul Byers. “They did what they had to do. I did some things tonight which I shouldn’t have been doing, and I got myself into trouble and it’s hard to play in trouble against a physical team. They push you, you try to push back and you end up on the bench. You got to stay aggressive. You can’t quit.”

Eggins led the Ichabods with 13 points while Jacob Pullen had 21 for the Wildcats.

The Ichabods now travel to Las Vegas for a final exhibition game at 9:30 p.m. Tuesday against UNLV before coming home for weekend play in the Ichabods Basketball Classic.