Postseason not an option for Ichabod football 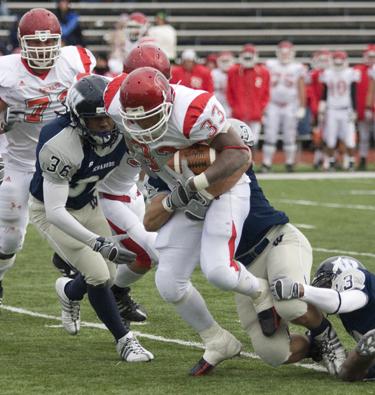 Running back Bryan McNeill formed half of a deadly duo in UNO's option attack. McNeill ran for 150 yards, while quarterback Zach Miller amassed 242.

Two weeks ago, the Ichabods were holding on to slim hopes that they could make a repeat trip to the Division II NCAA playoffs.

A blowout loss at Pittsburg State reduced their hopes to a Mineral Water Bowl bid, and to have any postseason appearance at all, the Bods would have to beat Nebraska-Omaha at home Saturday.

A 34-14 loss completed the three-game losing streak, and ended the careers of some of Washburn’s biggest stars, including first-team all-American Zach Watkins.

The season opened with talk of a deep playoff run, but early losses to Fort Hays State (the Tigers’ only MIAA victory) and Central Missouri put WU in a hole that proved to be too difficult to climb out of in October and November.

The game between WU and UNO was expected to be a close battle between two teams fighting for their postseason lives.

Zach Miller made sure that was not the case.

The Maverick quarterback rushed for a 1-yard touchdown with 10:30 left in the first quarter, and it was all downhill from there.

His next score came in the second quarter when the senior from Wahoo, Neb. kept the ball on an option play and ran 76 yards to make it 14-0.

After allowing the second touchdown in less than one minute, running back Justin Cooper and quarterback Dane Simoneau led the Bods downfield with a series of short plays, making it 14-7 and restoring WU’s comeback chances.

“All season our offense has been slowly improving,” said coach Craig Schurig. “These last few losses have hurt, especially because we miss out on the bowl, but I think we’ve done a good job improving overall as the season progressed.”

What happened on the next UNO possession showed a postseason trip was just not meant to be for the 2008 Bods.

Miller again used an option keeper to burn the WU defense, which had played solid all season until the past two blowout losses.

His third score, this time from 46 yards out, put UNO ahead 20-7 before halftime, opening the door for fans to leave and have little reason to return for a game that seemed much more out of reach than 13 points.

The other half of UNO’s option attack, running back Bryan McNeill opened the third quarter with a touchdown. A blocked punt on the Mavericks’ next possesion set the Bods up on the UNO 1, and Cooper ran it in to cut the lead to 27-14.

For good measure, Miller ran for one last touchdown in the fourth quarter to restore UNO’s three score lead.

“It’s tough,” said senior linebacker Bruce Ringwood, who played his last collegiate game alongside Watkins. “One thing you don’t miss are the practices, but for this to be our last game at Washburn, you hate to see it end.”

“The worst part of losing here today is we miss out on four weeks of practice we would’ve had leading up to the bowl,” Schurig said. “That helps just as much for next year as it does for right now.”

The coaching staff may feel differently about the importance of practice than the players, but there is plenty of optimism and hope amongst a team that will bring back many players from this year’s young, inexperienced squad.

There’s a word that would make any Maverick cringe.