No. 1 seed up for grabs in Washburn-Emporia State matchup 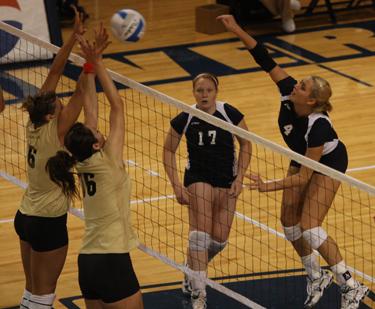 Senior Monica Miesner has the Lady Blues in position to earn one of the top two seeds in the South Central regional. With a loss at Pittsburg State, winning the MIAA becomes more difficult, but beating Emporia in the Blues' final match could be enough to win the region and play tournament games at home.

The No. 7 Lady Blues entered the final stretch of the season with a tough task ahead of them, playing two road games in two days against Southwest Baptist and Pittsburg State, both of which are extremely talented teams with hopes of making a run into the post season.

After going 1-1 in last week’s games, the Blues finish the regular season with games against Fort Hays and Emporia State with a shot to play the NCAA tournament’s first three rounds at Lee Arena.

On Friday night, the Lady Blues dominated the Southwest Baptist Bearcats behind the leadership of senior Monica Miesner in a 3-0 sweep, 25-15, 25-19, 25-12. Miesner led the team with 12 kills and 13 digs to ward off the attack of the Bearcats, who obviously had an agenda to cool down the red hot Lady Blues.

WU hit an impressive .387 and had just eight errors in 106 tries. Ashley Shepard had nine kills, while Caitlin Conley and Mollie Lacy each had five. Early in the opening set, SBU took the lead but Washburn responded with a pair of 6-1 runs, and scored four of the last five points to close out the set. In the final set, Washburn had a 6-0 and a 7-1 run to bring the game to a close.

The tables would turn, however, when the Lady Blues went to Pittsburg State. After trailing two games to one early in the match, the Gorillas came back 3-2 to win the match 17-25, 25-20, 17-25, 25-23, 15-13. Once again, Meisner was in all-American form and had a double-double, with 16 kills and 19 digs. Freshman Mollie Lacy and sophomore Caitlin Conley had 15 and 14 kills respectively and had a .333 attack percentage. The Blues had an uncommon eight service errors and 13 attack errors in the match.

“It was a really good game as it went to five, but our mistakes cost us the game,” said Conley. “Fatigue was never an issue, instead we had a couple of missed serves at important points in the match.”

After the loss, Emporia State leads Washburn by a game and a half in the MIAA. The Blues are now 14-4 in conference play, and are still in good shape to make a postseason run.

WU’s next game is against Fort Hays State on the Nov. 12, and just two days later, WU will take on the No. 5 ESU on the road.

Washburn and Emporia have been arguably the most intense rivalry in the MIAA, spanning across all sports, and this year’s volleyball matchup is especially interesting as the Hornets are having a good year, at 29-3 overall.

Although the game against ESU has playoff implications, the Blues continue to take their few remaining games one at a time.

“Right now we are not concentrating on Emporia State,” said Conley. “We are preparing for Fort Hays, which is also a very important game.”