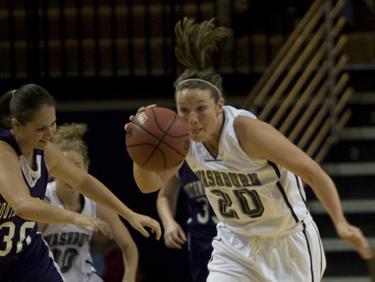 The Lady Blues' deep bench, including guard Hadleigh Meek, has helped the team to a 2-0 start heading into Tuesday's game against No. 7 Drury.

The No. 3 Lady Blues crushed the Missouri-St. Louis Tritons Wednesday night in the home-opener 73-50, and followed it up with another lopsided victory against Southwestern, winning 87-42 to improve to 2-0.

The Blues fell behind early against UMSL and were losing by as much as three points (9-6) before Alyssa Mullen and Stevi Shultz knocked down two consecutive 3-pointers to take and hold the lead. The Lady Blues led by a whopping 17 points at the half, 38-21. Washburn shot 15-28 from the field to give them 54 percent field goal accuracy, as opposed to Missouri-St. Louis’ 9-28 (32 percent).

Both teams were slow coming into the game after the half, but the Lady Blues wouldn’t let the Tritons come closer than 15 points (40-25) throughout the remainder of the game. Washburn shot 55 percent from the field in the second half (12-22). The Lady Blues also hit 14-15 free throws throughout the game.

The Washburn defense was stifling, and the offense took advantage of their opponents’ mistakes to create extra scoring opportunities. The Lady Blues turned 19 Triton turnovers into 18 points, but gave up 13 points on 10 of their own turnovers, even though Washburn had one more turnover.

The Lady Blues had a huge mismatch inside the paint, gathering 37 rebounds as opposed to UMSL’s 24. Alyssa Mullen led Washburn with 7 boards. Washburn doubled the Triton’s points in the paint, 40-20.

The Washburn bench proved to be a huge factor in the win, scoring 30 points. Renata Germano and Alyssa Mullen were the major contributors off the bench, combining for 17 points.

“I feel OK about my performance,” said Germano. “I’ve been in the program a while so I know the system and what coach McHenry wants. And I can’t do it without my teammates, they help me out a lot.”

Soccer stars Jessica Mainz and Lauren Henry both played in the game after participating in their first basketball practice the night before the game.

During the weekend, the Blues didn’t have any trouble cruising to another easy victory.

Washburn played in attack mode early and managed to build a 12-0 lead while Southwestern was unable to score for the first 4:14 of the game. Washburn held off a Moundbuilder comeback to lead at the half 37-24.

The second half was even more lopsided than the first. The Moundbuilders managed to shoot only 6-29 from the field and a lousy 4-19 from three-point range. Washburn shot 20-36 from the field and an incredible 6-11 from behind the arc. The Lady Blues also out rebounded the Moundbuilders 28-13 in the second half, and closed the game with an 87-42 win.

The Lady Blues’ bench proved their worth and scored 52 points. It is a rare thing to have such a talented bench like the Lady Blues, scoring more than half of their team’s total points. Southwestern’s bench only chipped in 16 points.

Hope Gregory led all Washburn players with 8 rebounds and 15 points, including four 3-point goals. Renanta Germano and Karla Tailele both had 11 points.

Jessica Mainz, starting her first game this season, provided the Lady Blues with four assists. Hadleigh Meek also had four assists off of the bench. Brette Ulsaker led WU defenders with two blocks and a steal..

“These first few games have shown us what we need to work on. We could do better on defense and our organization on both sides of the ball could use some fine-tuning as well,” said Germano.

The Lady Blues play No. 7 Drury in Lee Arena Tuesday night. “We are very excited to play in this game. [Drury] beat us last year so we are determined to prove that we can beat good teams.”