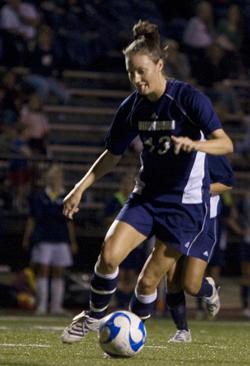 The Lady Blues closed out the regular season with 3-0 and 2-0 shutouts against Missouri Southern and Missouri Western Thursday and Saturday. The wins give Washburn a 14-6-2 overall record and 10-5-1 MIAA record, which puts the team in good position heading into the NCAA tournament.

Before the two wins, WU was ranked third in the South Central Region behind Central Missouri and Truman. UCM lost twice in the past week, but the Blues are likely to remain a three seed going into the 48-team tournament.

Thanks to a scheduling break, the Blues’ last three games were against the bottom three teams in the MIAA standings, and the team easily rebounded from a loss at Truman State the week before. The 2-0 loss was the only defeat WU has suffered since Sept. 27, and since the shutout, the Blues have outscored opponents 7-1.

With no MIAA tournament this year, WU heads into the national tournament playing their best soccer of the season.

“Our win against [Missouri] Southern was our most complete game of the year,” said coach Tim Collins. “Offensively and defensively, we just put it all together.”

There was no visible drop off in the following game, as WU seniors Jessica Mainz, Traci Nigg and Kaydi Hooker outplayed the MWSU on the Griffons’ senior night.

The Blues’ first goal came during the 26th minute of play, when Nigg scored on a direct kick, her second goal of the season.

Hooker put the game away in the 48th minute, scoring on an assist from Jessica Mainz, her ninth of the season and adding to her single-season assist record. Goalkeeper Ashley Klone only had to make two saves to earn the shutout.

Washburn outshot MWSU 13-5 and had a corner kick advantage of 7-4. This game also marked the 85th career start for Mainz, Hooker, and Lisa Fahey, which ties the MIAA record for most career starts.

“There’s no better time than now to start playing your best,” said Collins.

Now that the Lady Blues have essentially locked up a spot in the post season, which will be announced at noon today, they aren’t satisfied with the progress they have made since beginning the season 4-5-1.

With a core group of seniors returning to the NCAA tournament for the first time since a 2006 loss to No. 1 Nebraska-Omaha in penalty kicks, there is a sense of urgency knowing it’s their last chance to make a championship run.

“You like to see them playing so well to end the season,” Collins said. “Hopefully it carries over and we can see similar success in the postseason as well.”