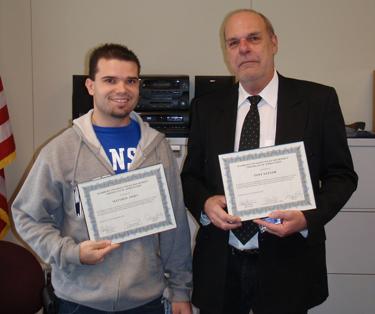 A Washburn student and professor received certificates of appreciation from the Washburn Police Department to acknowledge their outstanding ability to recognize a possible threat on campus and immediately notifying police, resulting in an arrest.

Professor Tony Naylor, technical director of the university theatre, was leaving his office at about 9:30 p.m. on Nov. 3. As he walked to his car in the parking lot by the Bradbury Thompson Center, he noticed two people walking through the area who didn’t seem to belong. Naylor observed the two as they quickly began to walk the opposite direction of him, checking over their shoulders as they did so. Immediately suspicious of such behavior so late at night, Naylor proceeded to contact campus police.

Meanwhile in the Washburn Village parking lot, sophomore Matthew Swift sat talking in his car with his girlfriend. He noticed two people walking through the parking lot and he too said he knew they didn’t belong. As Swift sat in his car, the two passed by and made eye contact with him. Swift then saw one individual attempt to open a car door. That was when he, too, took action, notifying the Washburn police.

Washburn police arrived on the scene, arrested the two suspects for outstanding warrants and charged them with lurking and prowling on a college campus. Thanks to the efforts of Naylor and Swift, possible car break-ins and theft were averted on campus that night.

“People that step up and answer the call should be recognized for that,” said Dean Forster, Washburn police chief. He said this was the first time this year that a certificate was given in a situation like this.

Both Swift and Naylor say that generally, people aren’t entirely aware of their surroundings, and don’t want to get involved if they do observe a possible criminal situation.

“Every citizen is part of the prevention,” said Naylor. He attended the citizen’s academy offered by the Topeka Police Department last year. “I thought it would be a good learning experience,” he said.

“I look around and observe things,” said Swift. “That’s what I did that night, I was observing.”

Swift said his father is a retired police officer, therefore he has been taught what to look for.

Naylor and Swift were able to give police very good descriptions of the two individuals and both said they knew immediately from their appearance and behavior they did not look like college students.

“We can’t police this campus by ourselves, we need the student and faculty help,” said Forster. “We don’t want people to be intimidated to talk to us.”