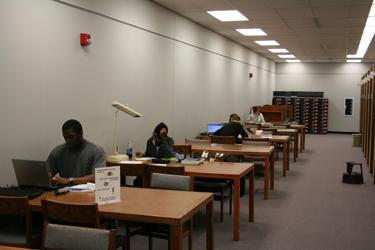 During the weeks building up to finals week, Mabee Library has been a place of refuge for students seeking an environment conducive to studying. The library has changed their hours to coincide with student study habits, though, staying open until 1 a.m. during finals week as opposed to the 24 / 7 hours kept during finals week last spring

Students looking to thumb through library periodicals at all-hours of the day and night during finals week may be sorely disappointed.

Instead of being open 24 hours a day during finals week as it was last semester, Mabee Library chose to remain open during those hours the week before finals, and will only remain open until 1 a.m. the week of finals.

“The numbers have not been strong the last two finals weeks, so in consultation with WSGA, we decided to make the library available 24/7 the week before finals,” said Alan Bearman, interim dean of libraries. “The week before finals is when students are finishing up final projects and writing papers, and the week of finals is more study time.”

Statistics have proven the effectiveness of this change. Last year, there were only seven students using the library at 3 a.m. on any given day during finals week, while this year upwards of 35 students utilized library facilities at 3 a.m. the week prior to finals.

“This is a better deal for students,” said Jennifer Mills, president of the student chapter of the Friends of Mabee Library. “We have no dead week, so everything is due the week before finals. This just seems like a better idea because students are pushing themselves for two weeks straight. They’re burnt out by the second week, and so they don’t use the 24/7 hours.”

Judy Druse, interim assistant dean of libraries, said that this change is an experiment based on the Washburn Student Government Association and library staff collaboration. Depending on student feedback, they will either continue or discontinue this practice next year.

“Massages at Mabee” are back by popular demand, sponsored by WSGA. Students simply have to show up in the iRead area of the library between 11 a.m and 1 p.m. this Monday, Wednesday and Thursday to receive this therapeutic bonus.

A third benefit provided by WSGA is free pizza, which will be available during the same hours as the massages.

The fun does not end there. KAW Yearbook staff will be at Mabee every day handing out stress balls and silly putty. And on Monday, they will have a silly photo booth set up. All of these amenities are just as free as the pizza. Finally, WSGA has hired a caricature artist to bring some laughs to counteract the severity of finals week. The artist will be available from 11 a.m. to 3 p.m. Tuesday in Mabee Library.