NCAA should add angling as next big collegiate sport 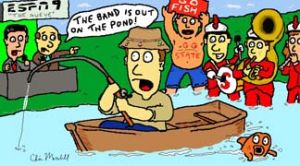 College students have long searched for ways to stay active and enjoy the outdoors.

It is my opinion that the NCAA should make an effort to not only enhance students’ experiences in the outdoors, but actually reward them for it.

Hunters and anglers are often the ones at the forefront of preservation and conservation of our natural resources. For instance, Ducks Unlimited is one of the leaders in wetland restoration, spending millions of dollars to restore marshes throughout the United States. Realtree Outdoors and the Rocky Mountain Elk Foundation both have agendas of passing on hunting and conservation to the young in order to preserve wilderness for years to come.

With the billions of dollars being spent to ensure youth are educated on the importance of a clean environment, it seems like the NCAA would take great strides in the area by making fishing an official sport within the collegiate landscape.

There are several reasons why angling should be picked up at the college level. For instance, there are no farm systems or introductory leagues into professional fishing. Aspiring pro anglers have no idea how to make it into an official league like the Bassmasters. Fishing competitively at the college level could offer a gateway into a more illustrious fishing career for many avid anglers, thus offering a chance to attract students who may not otherwise have considered a college education.

Fishing also corresponds in many cases with a curriculum. Whether it be biology, agriculture, animal sciences, park management, forestry… the list goes on. Perhaps no other sport in the NCAA can be connected to a curriculum quite like fishing can be. It really offers a chance to become a student-athlete, with an emphasis on student.

Fishing actually is a very popular spectator sport. The Bassmasters, for instance, draws huge crowds along the shoreline, in boats and especially at the weigh-ins. The 2009 Bassmasters Classic weigh-ins, for instance, will take place at the CenturyTel Center in Bossier City, La., in order to host the large crowd following the events. Several of the anglers in the event are household, if not legendary, names within the fishing community, such as Kevin Van Dam, Mike Iaconelli and Dean Rojas. The following behind these famous fishermen shows that students would have the ability to draw interest in a university from a large and diverse crowd.

I’m not saying that you’re going to see the same college pageantry that other NCAA-sanctioned sports receive. I doubt very much that anybody will march out a band or a cheering section full of passionate students with innovative chants (Hook ’em, Horns?) Tackle boxes signed by college anglers probably wouldn’t go for thousands on eBay. In all likelihood, bass fishing is not going to replace the bowl season or March Madness as some of the most popular college sporting events.

However, it is very possible these events would still see significant airtime on television. Local stations are always (pardon the experession) fishing around for something of local value to air, and major networks like ESPN and Fox Sports often air some of the most boring sporting events in history (World’s Strongest Man and cheerleading competitions come to mind), so the occasional fishing tournament could definitely spice things up a bit.

Outdoor and college sports networks would also be chomping at the bit to broadcast some big time tournament action.

One of the obvious questions I can see surrounding the proposed idea is this: What species would college anglers be going after?

The beauty about fishing is that each different species takes different skills and techniques to catch. It only seems appropriate that college students, who are supposed to become more diverse individuals through the educational process (Transformational Experience, anyone?), should focus on all sorts of different species.

Chasing different species could be something that draws even more attention to the sport, much like the World Series of Poker (another ESPN sport that draws huge crowds despite very little action) doesn’t just focus on Texas Hold ‘Em, but rather several different games.

The beauty is that it not only creates parity-different colleges may be better at targeting different species-but it opens up an opportunity for students to fish for species they may not normally have had a chance to target (eg. Washburn competes in salt-water fishing tournament, Florida State wins salmon fishing tournament).

In the end, perhaps it is only my own selfish dream to be on a collegiate fishing team, to have a chance to be an athlete without having to pump my body full of steroids or become bulimic (looking at you, wrestlers). God forbid the NCAA sanctioned a sport that requires strategy and studying rather than lifting weights or running eight miles a day.

But maybe, just maybe, an NCAA official will read this plea and will make my dreams come true. If that indeed does happen, you can expect my next column to be “Why the Olympics needs competitive angling.”