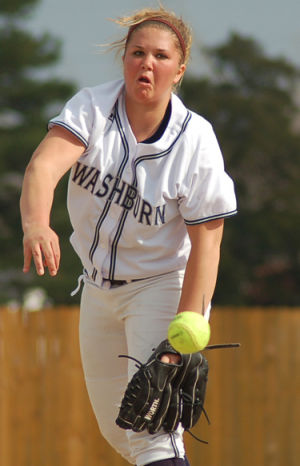 The Washburn softball team fell to 1-8 on the season after losing three out of four last weekend in the Central Oklahoma Invitational in Edmond, Okla.

The Lady Blues split a doubleheader with Central Oklahoma on Saturday, losing the first game 11-1 before winning the second 6-2.

After being limited to just three hits in the first game of the day, the Blues found their groove offensively in game two.

Despite three errors, the three runs Washburn scored in the first inning were more than enough to hold the lead from start to finish and get rid of the goose egg in the 2009 win column.

The Lady Blues went 0-5 in the St. Mary’s Invitational held from Feb. 5-7 in San Antonio, Texas.

Through nine games, the Lady Blues’ best pitcher has been junior Kayla Long, who is 1-3 with a 3.10 earned run average. On offense, senior Dani White is hitting .414 with one home run and six RBIs, while junior Tish Williams is batting .346 with four home runs and six RBIs.

Washburn next plays at 1 p.m. Thursday in a doubleheader versus Southeastern Oklahoma in Durant, Okla.