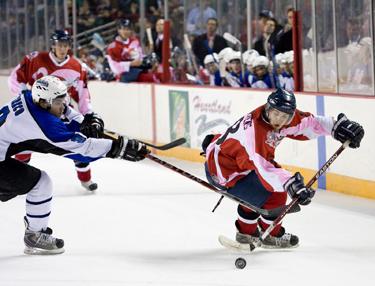 With two wins in two days, the RoadRunners hold a six-point lead over all competitors in the NAHL. The team looks to repeat as South Division champions and build on last season's playoff success.

A year after winning the NAHL South Division and making a deep playoff run, the Topeka RoadRunners lead the league in points and are poised for another division championship.

The closest competition for the RoadRunners in the standings are the St. Louis Bandits, not just in the division but in the entire league.

After a weekend series in the ExpoCenter against the Bandits, the Runners increased their point margin from one to six.

The team may have been wearing pink, Valentine’s Day-themed jerseys, but there was nothing light-hearted about the performance.

On Friday, the teams battled for a back-and-forth lead before heading to overtime, when Eric Artman slammed the game-winner in for a 3-2 win.

And as if the first game wasn’t close enough, the next night’s match up went to a shootout before Topeka finally prevailed 2-1.

The Runners fell behind 1-0 after allowing a goal just 32 seconds into the game. Despite the quick score, neither team found the net again until Jordan George put in the equalizer with 37 seconds left in the third period.

In overtime, Topeka outshot St. Louis 4-0 but couldn’t score. Lyle Rocker, goalkeeper for the Runners, came up huge in the shootout, making four saves to ensure a victory.

The Runners won’t play at home again until Feb. 26 (which explains the pink jerseys two weeks before Valentine’s Day) and hope to have a big turnout for Washburn Night on Feb. 28.

The Saturday night game will feature discounts to Washburn students and include performances from the Dancing Blues and the Ichabod mascot.