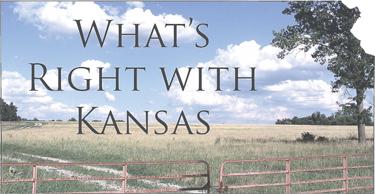 Washburn University’s Center for Kansas Studies capped off the state’s birthday week with a “What’s Right With Kansas” presentation by Richard Wood, author of “Survival of Rural America.” A mixed audience of 40 faculty members, students and interested Kansans came to Henderson to attend the talk and book presentation.

The presentation focused on the struggles of small Kansas towns and what they are doing to survive. To explain the problem, Wood presented statistical graphs documenting how rural farming towns are losing residents at unsustainable rates.

“I was inspired to look into the subject when I read a story about small towns so desperate to survive they were giving away land,” said Wood.

He has read Thomas Frank’s “What’s The Matter With Kansas,” and disagrees with the basic premise that the problem is political.

“I see what is happening in our small towns as more of an international problem related to peoples preference for city living,” said Wood. He pointed out how the phenomenon of rural populations migrating to urban centers is occurring around the world.

The migration is spurred by jobs lost to increased farm efficiency and a social desire for what city life can offer. But some rural towns in Kansas will not go quietly. Small but determined groups of citizens are reinvesting in their towns and fighting to keep their schools. As go the schools, so go the populations. To keep their own children around, the enterprising town of Tipton financed and built its own private school.

Another tactic is to increase tourism and interest in the town by creating a “purple cow,” as Wood calls it. The town of Lucas, for instance, has reinvented itself as the folk art capital of the world.

Thanks to modern shipping, some towns have become hubs of specialized manufacturing and providers of unique goods, while the Internet can offer off-site work from home. Often, residents invest money in their towns to attract state and federal money for infrastructure.

Regarding his research, Wood said he came away from it with two things: As an asset, rural America is a better place to raise kids than in cities. Unfortunately, certain aspects of rural life don’t appeal to enough people.

“Youth migration is a problem without a solution,” said Wood.

So it seems Kansas has some growing pains on its birthday, but many determined residents are fighting to preserve these smaller homes on the range.