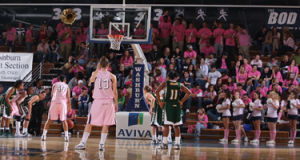 The No. 9 Washburn Lady Blues basketball team cruised into John Lance Arena in Pittsburg Saturday for their last regular season road contest, having won eight consecutive games and looking to finish on a strong note. However, the Gorillas had other plans.

Playing in front of a crowd of 3,177 in the WBCA’s Pink Zone Game, Pittsburg State beat Washburn 94-87 in three overtime periods and ended a 16-game losing streak to the Lady Blues that dated back to 2001.

According to Washburn Sports Information, Saturday’s game was the longest game in Washburn history, as well as the first time the Lady Blues had lost after scoring at least 81 points. They were previously 71-0 when passing the 81-point mark in a game.

Senior forward Stanecia Graham led Washburn in scoring with 29 points off the bench, followed by 21 by senior guard Janice Bright, and a career-high 16 for junior guard Brette Ulsaker.

While the Lady Blues still have their second place spot in the MIAA with a record of 22-4 overall and 15-4 in conference, the loss ended any chance for the team to win the conference outright. The best they can do now is tie with conference leader Emporia State. Even for that to happen, the No. 8 Hornets would have to lose their last two games, one being at 5:30 p.m. on Wednesday in Lee Arena against Washburn and the other being Saturday in Emporia against a Fort Hays State team that is seventh in conference with a record of 11-14 and 7-11.

The Lady Blues began the week with a convincing 75-48 victory against Missouri Southern Thursday in a packed Lee Arena. Getting out to a 15-0 lead, Washburn never trailed, leading 39-19 at halftime and by as much as 30 in the second half.

“I think the game we played [Thursday] was our best game of the season,” said Renata Germano, senior center. “We actually went out and found where we were supposed to be.”

Leading in scoring for Washburn was Bright, who had 19 points. Senior forward Kalee Silovsky had a career-high 16 points while Graham had 13 off the bench.

Avenging an early season loss to the Lions, the Lady Blues could have been called the Lady Pinks as they, and many of the 2,882 fans, were decked out in pink to honor their version of the WBCA’s Pink Zone game to help support breast cancer awareness.

Thursday’s game was also an opportunity for Washburn’s bench to get some playing time. Every player got into the game, including freshman guard Stevi Schultz.

“It’s just getting experience under my belt,” said Schultz. “Every minute counts a lot. It was an exciting game and a big win for us just because we flowed with it so well. Everyone played well together. ”

So with Emporia State coming to town Wednesday for a big rivalry game, the Lady Blues will celebrate Senior Night as it’s the last regular season game of the year. Six seniors, including Bright, Silovsky, Graham, Germano, Jessica Mainz and Karla Tailele will be honored.

The Lady Blues will then have a week to rest before the MIAA Basketball Championships March 5-8 at the Municipal Auditorium in Kansas City, Mo.

If the Blues finish the season in second, they will play the No. 7 seed in the first round at 6 p.m. on Friday, March 6.

Currently, the team holding the No. 7 spot in the standings is Fort Hays State, with a record of 11-14.