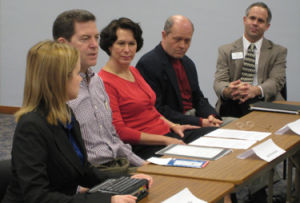 On Valentine’s Day, Washburn University’s department of social work hosted Sen. Sam Brownback’s forum on adoption in the Memorial Union. Sixteen adoption and foster care professionals, adopting parents and adult adoptees comprised the round table. Adoption is of special concern to participants Sam and Mary Brownback, who have adopted two children from China.

“The goal is to find what can we do to best help the adoption process, especially for special needs children such as Down syndrome children, children of color and to address issues of international adoption,” said Brownback. “Worldwide there are 133 million orphans, in the U.S. there are 129,000 in foster care and awaiting adoption, in Kansas there are 870 foster children available for adoption.” according to Gina Meier-Hummel of KVC Behavioral Health Care.

“Kansas is one of the worst for moving children along from home removal to adoption, in the bottom three nationally,” said Myndee Reed. “It takes an average of three years,” added Shelley Duncan of Youthville. This delay is problematic because of the negative effects on children.

“Reactive Attachment disorder arises out of adoption delays making it hard for children to bond to adoptive families,” said Cathy Renshaw. “This is harmful to children and stresses families.”

Timely adoption is complicated by law. The Kansas Safe Families Act has placed emphasis on keeping families united and as it protects the family of origin it slows the adoption process. Being able to cross borders to match hard-to-place children with parents would be ideal, but states are protective and requirements vary. Judges and social works don’t always know the law and not all states have ratified the Interstate Compact for Placement of Children, a federal law to track adoptions across state lines.

International adoption is complicated by the lack of a federal clearance house, so an adopting family that may have resided in several states over the years has to seek clearances from each state.

“China adoptions are more organized under their state regulations, and children seem to be better taken care of,” said Stacy Beatty of Great Wall Of China Adoption. Foreign orphanages have learned that if they adopt out a few children, the institution becomes of interest to the parents and the institution becomes a secondary beneficiary of the adoption.

The forum was followed by a well-attended reception and news conference where Brownback announced “I want to reduce [adoption] red tape and bureaucracy and to help financially with tax breaks and credits. And especially help the adoption of special needs children who eighty to ninety percent are killed in uteruo.” He is working on a bill with Sen. Ted Kennedy to form the National Adoptive Registry to help special needs children.

Adoption is important for humanitarian benefits to children, and to society in general. Children who age through the foster system are more prone to become homeless and involved in the criminal justice system. How to balance the rights of birth parents, the needs of children and the rights of adoptive parents won’t be solved in a single forum but it was a good way to raise awareness about the issue.