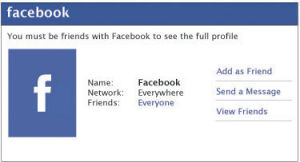 While what happens in Vegas may stay in Vegas, what happens on Facebook goes beyond just who gets added as a friend.

Late last semester, several students were found in violation of the alcohol policy outlined in the student handbook. The students in question were found in violation via photos found on Facebook by a resident assistant. In some cases, the RA was facebook “friends” with the subjects in the photos, but not with all the subjects who were “tagged.” The photos were taken in one of the rooms of the Washburn Village, and beer cans were visible in some of the pictures.

One of the students involved in the case, who did not wish to be named, said that the photos had been up for three months before the individuals in the photos got letters requiring them to appear before the dean of students.

“We were just taking pictures, having a good time visiting,” said the student.

When the student went to the office of Meredith Kidd, dean of students, he held up one of the pictures and asked if she noticed anything wrong. When he pointed out the cans, the individual said they did not belong to her or any of the group and the cans belonged to other residents in the apartment. The student was still fined for violating the alcohol policy. She said she knew who turned the photos in.

“I didn’t blame [the RA], but I didn’t know that they could use our Facebook photos against us,” she said. “Those could be photoshopped.”

The student was charged $5 per container, which added up to $15, plus additional fines.

“I’ve never heard of any other RA doing that,” said the student. “We could have been in any apartment in Topeka.”

The student said she had learned of high schools in which teachers and coaches would go through and patrol Facebook. Anything with alcohol or that would suggest partying would have to be taken down. However, at the university level, she thought things were different.

“Until this happened, I don’t think people knew that the university could use Facebook photos to get them in trouble,” said the student. “It’s not really that hard of evidence.”

Meredith Kidd, dean of students, said that using RAs to find violations of the student code of conduct was not something he encouraged.

“I haven’t sanctioned, I haven’t sent, I don’t care about sitting down looking through Facebook or MySpace or some of those other projects, looking for violations,” said Kidd. “RAs don’t have the time.”

“If they would have contested the charges, then it would take a different path,” said Kidd. “These guys confessed. I think it is possible for a photoshop thing. I don’t think that any case will go before the board that hasn’t been researched or made reasonably apparent that it needs to be reviewed by a Judicial Hearing Board.”

Kidd said that he did not feel that these cases set any kind of precedent and that searching for Facebook photos was not something he encouraged.

“If it looks like there is something that is going to be interruptive to your education’s pursuit or safety, then it’s not a precedent, it’s just good common sense to check that out,” said Kidd. “We promised we would do that when you sign that application for admission. I am not going to sit here and bust people for appearing in Facebook. That’s not our goal, that’s not our motive.”

Joel Bluml, director of the Student Recreation and Wellness Center and a member of the Judicial Board, said Facebook was a useful tool and echoed many of Kidd’s statements, including the lack of motivation to go out and search Facebook for incriminating photos. He said the University does not have a separate policy for Facebook and the information procured through Facebook is treated like information brought forth in any other way.

“Some people may think ‘don’t bother me when I am doing what I am doing on my own time,'” said Bluml. “Some of those same people may be outraged if something tragic happened on a college campus and the university wasn’t aware of it. It’s kind of a double-edged sword.”

Bluml said Facebook was a good tool for communication, but can also be a potentially dangerous one for students.

“It has to be a tool that you use to make your life better and enhance your life,” said Bluml, “versus the exact same tool that can be something that diminishes your educational experience – you aren’t studying enough because you are always on Facebook. You are going out and having experiences just so you can post them on Facebook so you can look like you are having a great time.”

At the SRWC, Bluml said he tries to inform students working there that what they post on Facebook has the potential to impact their future.

Patrick Muenks, a political science major and another board member, said that as a board member, it does not create issues for him.

“The code of conduct is very clear, it simply states that if alcohol is in the dorms, you are in violation of the code of conduct,” said Muenks. “Beyond that, as long as there is evidence to support that idea, then there really are no exceptions to that.”

However, as a student, Muenks thinks that RAs and CAs should not go hunting for photos, and that students should be made more aware of how easy it is for anyone, not just people you have added as “friends” to see information posted on Facebook. Because of his position as a student leader on campus, Muenks said he has had more opportunities to hear about the impact of information on Facebook.

“I don’t think that a lot of publicity is done or a lot of emphasis is put on general students who aren’t quite as active or don’t get access to those opportunities,” said Muenks.

Overall, Muenks said students should be aware of how public Facebook actually is. Muenks mentioned the ability of Google search engines to search Facebook for a specific date, so if a student posts incriminating photos on Facebook, but takes them down, those pictures can still be found through the search engine.

“I think the best answer is to just not put them up,” said Muenks.