Dogs at work: Titan from Pathways 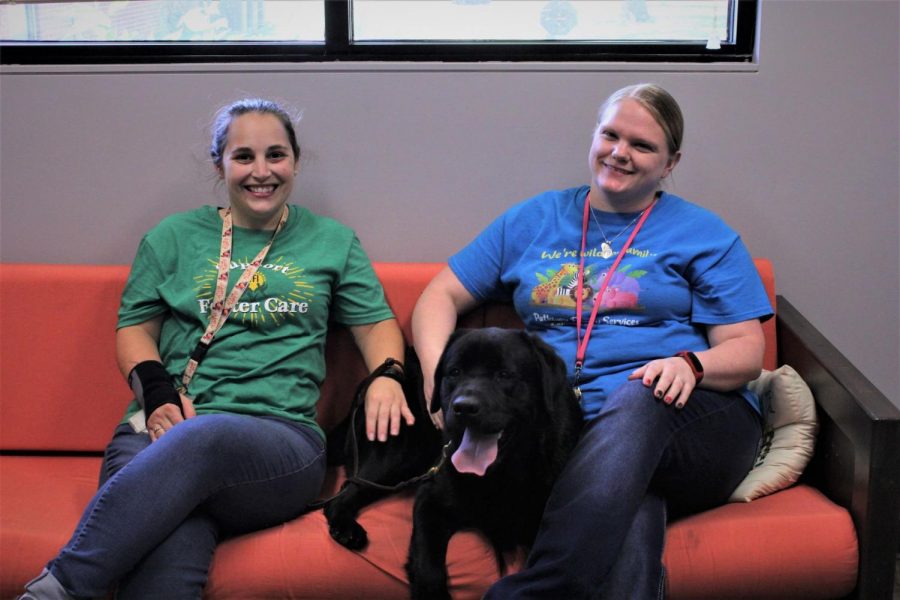 Couch canine: Titan and his two handlers, or "moms," sit together on one of Pathways' several comfortable couches. In the past two months, Titan has joined many kids for therapy sessions on these sofas, providing comfort and a sense of ease.

Animals play many important roles in our lives. Some are kept as beloved pets in our homes and others as helpful workers on farms. However, there is a special sect of animals that aid humans through service or therapy.

Titan is a 2-and-a-half-year-old golden retriever/black Labrador mix that was trained since 8 weeks old to be a service animal. For the past two months, Titan has found a family in the community of Pathways Family Services of Topeka, a psychiatric residential treatment facility for kids aged 6-18 with severe trauma or mental illness.

“I’ve seen the kids really warm up,” said Cassandra Gaddis, Titan’s clinical supervisor and co-handler. “They’re starting to express empathy for Titan and other kiddos as well. I’ve seen them start to put themselves in someone else’s shoes, particularly his.”

Gaddis and Janene Tacey, director of clinical operations, have both taken on the role of “Titan’s mom” and handler in his time at Pathways. The two switch off and on, taking Titan home in the evenings and working together to train and guide him during the work days. Because of this, the pair have been able to closely observe how Titan has been a positive influence.

“I truly believe in the power of connection between humans and animals,” said Tacey. “We’ve even seen him help staff overcome their fear of dogs. They’re able to be around Titan and see that, even though they might have had a traumatic experience with a dog in their past, not all dogs are like that.”

Titan’s primary job involves joining kids in their therapy sessions, where he is always accompanied by either Gaddis or Tacey. However, he has many other roles that happen as second nature for him.

“They’re able to use the skills they learn with Titan and transfer it into daily life,” said Gaddis, “and empathy is one of those. Empathy is really hard to teach for kiddos, but he can teach them so naturally.”

“Even hygiene. Kids will ask, ‘Do you have to brush his teeth,’ and I say, ‘Yeah, everybody who has teeth has to brush their teeth, just like you. I brush his hair every day and give him baths too.’ We have little ones who struggle with hygiene so it’s neat how he can help with even daily aspects of their lives.”

Washburn graduate student Kayla Stone started working at Pathways at the beginning of this semester and has also seen major changes as a result of Titan’s presence.

“The biggest thing is just watching the kids’ demeanor change. Instantly when he walks into the room, I’ve seen kids go from severely dysregulated to laughing, smiling and petting him. Being able to watch that 180 and just being able to see the instantaneous relationship they have has been incredible. As a therapist, you want to build rapport with clients as well, and dogs really help with this.” said Stone.