No. 11 Blues excluded from regional Top 10 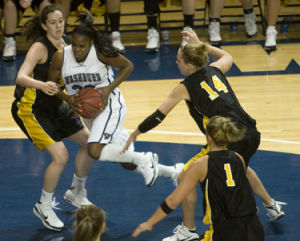 The Washburn Lady Blues are on pace to have another great season currently sitting with 17 wins and only three losses.

However, according to voters in the South Central region, they have not clearly proven themselves. When the Top 10 rankings for the region were released last week, the Lady Blues were excluded.

The three teams Washburn has lost to in the 2008-09 season, Emporia State, Central Missouri and Missouri Southern, are the three MIAA teams that made the rankings at No. 4, 6 and 7, respectively.

Head-to-head results make those three MIAA teams sensible choices for the Top 10, but there are also three six-loss teams ranked higher than the Blues, including No. 8 Northeastern State (10-6), No. 9 Southeastern Okla. (8-6) and No. 10 Texas A&M Commerce (10-6).

“I understand the formula a little bit but the fans struggle with the it,” said Washburn coach Ron McHenry. “Because they say OK, we’re 16-3. Take off the NAIA games because they don’t count. So you go down to 14-3. And then in regional play we’re 11-3. But there are teams that are 8-6 that are ahead of you. So that struggles us a little bit. There is a formula, you can’t call the committee and get the formula. They’ll give you the formula but won’t give you the [breakdown]. I don’t understand that. Because really it’s hidden information about what we’re doing.”

While the Blues are still ranked No. 11 nationally, the regional rankings are similar to the BCS rankings in college football: they are the ones that matter.

Teams must be in the top eight at the end of the season or make the NCAA tournament. Even then it’s no guarantee for the No. 7 and 8 ranked teams because if an underdog wins their conference tournament, they get an automatic bid into the NCAAs, knocking out a team that would have had an at-large berth.

With seven games left to play in the regular season, the Blues have already clinched one of eight spots in the MIAA tournament, but the seeding is still up for grabs.

While Washburn would be seeded second if the season ended today, they still have games scheduled against all four of the conference’s other top five teams, including MIAA leader Empoira State.

For the team, there is only one thing they can do.