Ichabods move up in MIAA with back-to-back wins 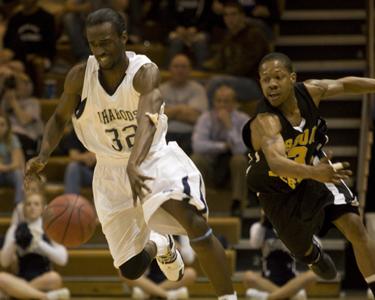 Guard Covier Carter has been a solid role player for the Bods since his arrival to the team. Along with Carter, Logan Stutz and Nate Daniels have seen their playing time and scoring increase. The lineup change resulted in back-to-back wins.

The last time Washburn’s men’s basketball team won back-to-back games they were headed to Hawaii for a December tournament.

In the past two months, the team showed flashes of brilliance but followed big wins up with close losses. More questions arose about how the team would recover after losing point guard Mario Scott.

While Covier Carter and James Williams were expected to be solid replacements, few expected that the team’s results would improve with the new starting lineup.

On Wednesday, the Ichabods traveled to Northwest Missouri for a 71-65 and came home Saturday to beat Missouri Western 79-78.

In the MIAA, which is competitive from top to bottom, the pair of wins is good enough to move Washburn into sole posession of third.

At 8-5 in MIAA play, the Bods hold a half-game lead over Fort Hays State, Emporia State and Nebraska-Omaha.

Close games are a common occurence as the postseason race heats up, and Saturday’s 1-point win was no exception.

Although the Bods led from start to finish, MWSU had the ball in the final seconds with a chance to win. Dominique Thuston hit a three to bring the Griffons within one but Parker Leonard’s game-winning shot fell short and WU held on for the win.

Darnell Kimble led the team with 22 points on 7-for-7 shooting and missed just one of his nine free throw attempts.

The final result was almost indentical to the 6-point road win earlier in the week: Kimble led a balanced offense in scoring and the team outplayed the competition in the second half to win a tight game.

At the end of the first half in Maryville, the Ichabods were down 29-28, but came back with a splash by scoring five unanswered points and dominated the first 4:38 of the second half. The run pushed the Washburn lead to 45-37 as Nate Daniels scored a tip in and a pair of free throws for four quick unanswered points.

Following a seemingly endless array of lead changes and near misses, Eggins, who is the Bods’ leading scorer was fouled and his first free throw to put the Bods up 64-57 with 1:05 remaining.

With 36 seconds left, Mike Larson hit a desparation 3-pointer from 26 feet away to pull NWMSU with four points.

Kimble, who scored 16 points on 7-for-9 shooting, was fouled and hit both free throws with only 10 seconds remaining to put the game out of reach for the Bearcats and giving the Bods a 5-point cushion.

The Bearcats did manage to score a layup, which was followed by two free throws by Williams to end the game.

“We needed a win,” said senior Moriba DeCoteau. “We played hard, and together and got a quality win against a very good team.”

Eggins had 14 points, followed by Daniels, who broke his career high for points in a game with 10 on Wednesday and 14 on Saturday.

“If Nate continues to play like he did this game I think we have a good chance for the post season,” said DeCoteau.

Daniels, like Stutz, has seen his playig time and stats increase without Scott on the roster.

The Bods improved to 6-0 on Wednesday night games, a trend they hope to continue this Wednesday against Truman State, the MIAA’s last place team.