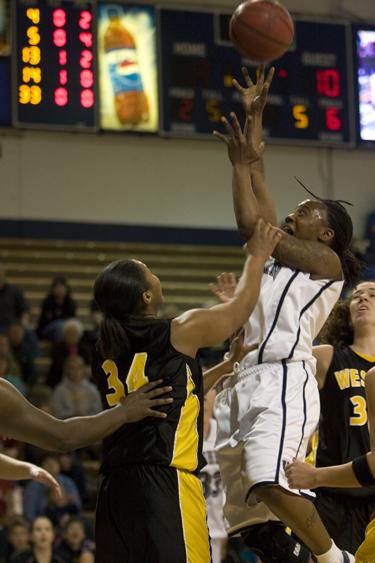 Erica Brown drives to score two of her eight points against Missouri Western. The Blues won their third consecutive game.

For teams in the bottom of the MIAA standings, it’s not a good time to be playing the Lady Blues.

After being denied a spot in the Top 10 South Central regional rankings despite a No. 11 national ranking, the Blues’ schedule featured three straight games against teams with the MIAA’s worst records.

The Blues take the court Wednesday for a match up against last place Truman State, and with a chip on their shoulder the size of a Funyun, the team isn’t likely to overlook any competitors.

Even if the three opponents have a combined 5-33 conference record.

“Right now, a lot of teams in our conference don’t respect us,” said guard Janice Bright. “A lot of teams will come out and make a little run on us. It kind of gives them some confidence and they get their heads up.”

Saturday’s game against Missouri Western was close early, and the Griffons led five minutes into the game, but a 17-2 run gave the Blues a 12-point lead they held for good.

For the ninth consecutive game, Bright scored 20-plus points with 23, a game-high.

Last Wednesday, 20 points from Bright and another double-digit scoring performance from Tailele were again the key in a road win for the Blues in Maryville, Mo.

The game was close for much of the first half with a halftime score of 23-19. However, the Bearcats gained their first lead early in the second half and were up one point with 14:18 left.

That would be the last time the Lady Blues trailed though as Tailele came off the bench and hit a 3-pointer to regain a 33-31 lead. Tailele scored all 10 of her points, including two 3-pointers, in the second half during a key six minute stretch for the Lady Blues in which they outscored the Bearcats 16-6.

“[Tailele]’s done that. When we went to Florida, she had two really big halves and really carried us down there in points when we were struggling. Karla’s kind of our zone shooter so it was good to see her step in and hit some shots.”

Bright chipped in 14 of her 20 points during the second half while grabbing seven rebounds. Senior guard Jessica Mainz added 12 points, eight rebounds and five assists.

“In the second half, we just told ourselves we’re going to come out here and we’re going to defend better and we’re going to get stops, and that’s what we did,” said Bright. “We picked up our defensive intensity and we were able to get a lot of fast-break points. So it allowed us to get on a good run.”

The victory moved the Lady Blues all-time record against the Bearcats to 40-9 including 14-5 in Maryville. While the Lady Blues have clearly dominated the series, coach Ron McHenry says the Lady Blues still have to work for their wins in Bearcat Arena.

“It’s a hard place to play, actually, and we always struggle up there but we always seem to find a way to win,” said McHenry. “But it’s always a game of cat and mouse with the way they play their defenses against us. Their offense sets are a little different. They’re not a traditional MIAA team as far as what they run and play. We’ve just been fortunate enough to pull out some wins up there.”