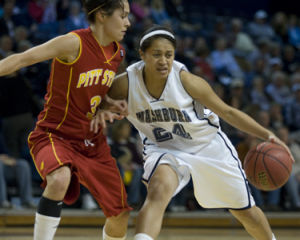 The No. 9 Washburn Lady Blues proved they could win a game in more than one way last week as they beat conference opponents Southwest Baptist and Central Missouri to earn their 20th and 21st wins of the season.

Saturday at Bolivar, Mo., Washburn handled Southwest Baptist 99-93. And while the Lady Blues led by just four, 47-43, at halftime, a 20-6 run by Washburn to begin the second half opened up a lead that they would hold for much of the period. It was only late in the game when the Bearcats made a comeback. However, they would never get any closer than six points.

“We know we’re back in the fight for regionals and stuff so we’re all real excited about that,” said Janice Bright, senior guard. “So it motivates us to come out harder every game. We were surprised we scored 99 points. We were trying to get 100 but it didn’t work.”

It was a season-high in points for the Lady Blues as five players scored in double figures, including 27 for Bright.

While 99 points were the most the Blues have scored all season, the 93 they allowed was the most ever the team has given up in a win under McHenry.

The Blues improved to 71-0 in the McHenry era when scoring 81 or more points.

In Wednesday’s game, Washburn took care of business in the first half, scoring 45 points in route to a 73-58 win over the Jennies in Warrensburg, Mo. The Lady Blues made 15 of 26 field goals in the first half and forced 13 Central turnovers leading to 19 points.

“We were just playing defense the way we know how,” said Stanecia Graham, senior forward. “We usually play good defense regardless of who we play.”

The Lady Blues have scored at least 45 first half points in three straight games and now have a winning streak of seven games.

“Definitely the first half of the last two games have been huge for us,” said Mainz. “We’ve gone out, made some shots and we usually always play good defense, so to be able to score points, we’re going to be tough to beat.”

“That’s a pretty impressive record there but it’s just every day we come in and work hard,” said Mainz, who has helped the Lady Blues build a 108-15 record in her four years. “The people [coach Ron McHenry] brings in, as long as we work hard, we’re going to be able to win 20 wins a year. That’s really what we shoot for, and we’re hoping to go farther than that.”

McHenry passed former UCM coach John Pye for sixth on the all-time MIAA win list with the win against the Jennies, and is just four back of fifth place with a record of 235-47.

After missing out on the regional top 10 in ranking’s original release two weeks ago, the Blues are now No. 7.

Washburn’s final three regular season games are against the top tier in the MIAA. The first begins at 5:30 p.m. Thursday against Missouri Southern in Lee Arena. The Lady Blues will look to avenge a 1-point loss against the Lions from earlier this season.