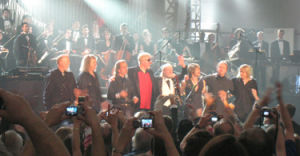 Kansas brought the music home Saturday night at White Concert Hall. The Topeka-born classic rock act teamed with the Washburn Symphony Orchestra for a concert, which was filmed for the band’s 35th anniversary DVD titled “Know Place Like Home” to be released in August. Performing for about two hours, Kansas and the orchestra visited every era of the band’s history.

The current line-up features founding member Phil Ehart, Steve Walsh on keyboards and vocals and Richard Williams on guitar, along with bass player and vocalist Billy Greer and David Ragsdale on violin, vocals and guitar.

The evening featured guest appearances by some former members. Former guitarists Steve Morse, currently of the band Deep Purple, joined for a performance of “Rainmaker.”

Founding member Kerry Livgren joined on guitar for “Hold On” and played pipe organ on “The Wall.”

“Icarus II,” a song written about a fallen soldier, was dedicated to the men and women serving overseas in the U.S. military.

Kansas closed the evening with a performance of their perennial hits “Dust in the Wind” and “Carry On Wayward Son.” Livgren joined in for both songs, which he wrote. For “Dust in the Wind,” Morse joined on violin. The crowd response for “Carry On Wayward Son” was possibly the loudest thing ever heard, or that will ever be heard, at White Concert Hall.

Members of the Washburn Symphony Orchestra started practicing the material for the concert after returning from winter break on Jan. 20. Trombone player Paul Kirkwood said that it was the most music he’s ever rehearsed for a single concert. He said it took a lot of hard work to learn the music in less than three weeks, but that it was amazing to be part of the concert.

“It’s once in a lifetime, or well, once in my lifetime,” said Kirkwood. “Nothing I ever expected to be a part of.”

Violinist Diana Crain is looking forward to the release of the DVD.

“It was really cool,” said Diana Crain, violin. “Cameras in my face freaked me out a bit.”

A portion of the proceeds from the concert will go into an endowment for orchestra scholarships.

Kansas fans, called Wheatheads, packed White Concert Hall. Wheatheads of all ages came, but the majority were old enough to remember when Kansas climbed the charts in the 1970s. Some traveled from all over the country to be part of their favorite band’s concert DVD.

“Excellent, the best I’ve seen ’em,” said Kurt Wagner of McPherson, a long time Kansas fan. Wagner has been a fan since the band White Clover, an early ’70s band that would later become Kansas. Since then, Wagner has seen Kansas perform at least 50 times. The concert tickets were a gift from his wife, Karol. Kurt conveniently mentioned the concert to his wife everyday from the time he first learned about it until tickets went on sale.

Kurt and Karol Wagner each came away from the concert with one of the drumsticks that was tossed into the audience after the show.

“He jumped the front row to get it,” said Karol Wagner. “We’re going to frame everything we got.”

David Citron of East Lyme, Conn. has been a Kansas fan since 1975, when he was 16 years old growing up in New Jersey. Citron estimates that he has seen Kansas perform at least 50 or 60 times, but this is the farthest he has ever traveled to see the band. He missed the filming of Kansas’ last DVD, “Device, Voice, Drum,” in 2002 in Atlanta, Ga. He was determined not to miss this one.

“I’ve always liked the symphony idea, so to be part of a symphony shoot was important to me,” said Citron.

Citron said that for fans, concerts like this are about memories

“Everyone has a band they listened to when they were 15 or 16,” said Citron. “After 34 years, the music brings back a lot of memories.”

Cheri Kutsch of Chicago remembers the first time she heard Kansas in 1975. She was first introduced to the band’s music through their second album, “Song for America.”

“My sister Cindy said, ‘You gotta hear this band,'” said Kutsch. “One time and I was hooked.”

Kutsch has lost count, but estimates she has seen Kansas perform between 60 to 80 times. She traveled to Topeka with her sister Jill Peal and friend Carol Dubois. The three also attended the recording of “Device, Voice, Drum,” in 2002, when they first met Todd and Jennifer Gaudier of Rochester, New York. The two groups met and partied together seven years ago in Atlanta. They coincidently met up again at the Ramada Inn on Thursday.

Todd Gaudier has been a fan since boyhood in 1977. He said that Wheatheads have a connection through Kansas’ music and lyrics. They find that a certain song will hold special meaning for fans or that a street sing will remind them of a Kansas song.

Todd Gaudier said that Saturday night’s show was the best he has seen and his excitement wasn’t soon going to die down.