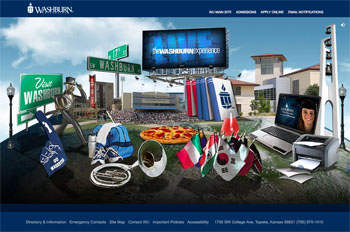 Washburn unveiled their new Web site on Thursday. We want to commend the university leadership for trying to revitalize the Washburn image and bring more students to campus. We are excited about the prospect of new students coming to campus with fresh ideas and new perspectives. We also know how difficult it is for admissions to recruit students in this economic climate and in between two larger schools. However, we can’t imagine what is appealing about the new commercials and the new Web site.

Every time we mention the commercials to anyone, they usually make a face akin to bitter beer face and say, “Oh yeah, THOSE commercials.” The idea might not be such a bad one, but we’re also not sure what a student spinning around in different outfits tells anyone about Washburn. One person we talked to said the commercials made us look like a community college. Perhaps the idea is not bad, but there are so many unique, wonderful things about Washburn that are not told properly by a photo illustration and a random student standing around awkwardly, trying to be part of the photo illustration. The commercials touch on the great things – the Living Learning Center is one of the nicest dorms, the study abroad opportunities, the political and professional experience possible in the capital city of Topeka and even the emphasis on Greek and Student Life. All are wonderful things, but that too much to pack into a single commercial.

As for the Web site, the front page isn’t so bad. It is miles away from the Web site from before. It looks slick and well done. The expanding and contracting navigation is a little confusing and the photo background is a little weird. The events thing is handy for students wanting to know what is going on around campus. If you are in Firefox, the MyWashburn link at the bottom in the middle does not work if you are in Firefox, but we Firefox users are used to that by now. The “Live the Washburn Experience” link is what really gets us.

When one clicks on the “Live the Washburn Experience” link, one gets taken to a jumble of photo cut outs with an annoying 10-second loop of electronic dance music. The music thing is just over the top. We can’t stand our favorite song on a continuous loop for long, much less a little ditty that sounds like it was composed in a basic version of Garage Band.

Once the user clicks on one of the pictures, a video pops up. The videos are helpful, they are informative and they offer an extended visual glimpse of Washburn’s various aspects. The academics and Ichabods on campus would probably get a prospective student excited about Washburn, which is fantastic. However, some of the links (at least, we assume they are links) do not work. For example, the gathering of flags that we assume is for the international programs does not have a video. The admissions building button-thing does not take the user to the admissions Web site. Also, the Washburn Transformational Experience is nowhere to be found on “The Washburn Experience.” This makes little sense as the WTE is something that should be front and center. The university will provide you funding to do any kind of transformational experience you would like to do. We think that would make a more interesting video than one about the Rec Center.

Maybe we are not the ones that should be commenting about the Web site, after all, we are already here. Nevertheless, the Web site is a public face for the University and a way to draw in new students. Would a prospective new student be more drawn in by the food court (which is deceptively depicted as serving good food) or the opportunity to serve as a legislative intern and the ability to fly to archives in other states or purchase equipment to do research? We think the latter. We like the idea of a new Web site, but we’re not sure “Live the Washburn Experience” is what we were looking for.