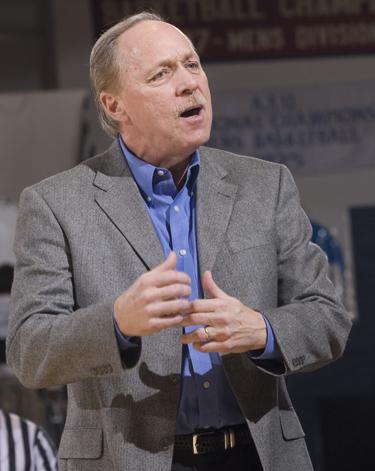 Bob Chipman coached his team to a near upset win at Southwest Baptist, but the loss dropped his team in the middle of the MIAA standings.

The past two games were expected to be the toughest for the men’s basketball team, and the top 10 opponents were every bit as good as expected.

Both games went down to the final minutes, but the Bods came up short in both contests.

At Central Missouri on Wednesday, Washburn played well offensively before falling 90-82 to the No. 11 Mules. Saturday’s game at No. 5 Southwest Baptist was even closer, but the game-winning shot came too late as the Bods lost 86-84.

After a mostly one-sided contest in the first half at Central Missouri, Washburn rallied to pull within four points late in the game.

The second half comeback was sparked by Covier Carter, when at the 1:16 minute mark, he made his move by hitting back-to-back 3-pointers to pull the Bods within five points of their out-of-state opponents.

DeAndre Eggins went to the free throw line after being fouled on a 3-point attempt, and converted on all three shots to pull the Bods within four at the 33-second mark. The Mules however, hit four three throws down the stretch and climbed to an 8-point lead, subsequently winning the game.

“They’re a very good team,” said Matt Keeley, assistant coach. “They’re currently 7-0 and lead the league and the region. With a team like that you just can’t afford to give up 90 points like we did.”

Darnell Kimble led the team with 22 points and 11 rebounds as he recorded his third double-double of the season. Freshman Logan Stutz and sophomore Nate Daniels both recorded career-highs with 15 points apiece.

In the Valentine’s Day showdown last weekend at Southwest Baptist, Washburn found that there was no love lost between Bods and Bearcats.

When the Bods played the then-No. 2 Bearcats earlier this season, Washburn came out victorious. This time however, they would not be so fortunate, losing on the road to the region’s No. 3 team.

The game was indeed a heated one. Although Washburn trailed for most of the game, the Bearcats never felt comfortable due to Washburn’s continuous onslaught coming primarily from Daniels, Eggins, Paul Byers and James Williams.

The real deciding moment came after a foul on Eggins on his way to a 2-point attempt with just 5.5 seconds remaining in the game. Eggins converted on the first and intentionally missed the second.

As if from the pages of one of the NBA’s most spectacular finishes, Washburn regained possession of the ball with 2.5 seconds left after Eggins’ intentional miss.

Eggins’ 3-point shot missed, but Lekheythan Malone rebounded the ball and went at the rim for a put-back dunk. However, the last second attempt came just a tad after the buzzer, resulting in a loss, but an overall strong effort, by the Ichabods.

Eggins earned top honors, finishing with 18 points, followed by Byers off the bench with 17 and Daniels, who continues to improve with 13 points.

The Bods are currently tied with Emporia State for fifth in the MIAA standings with just three games to go in the regular season. Of those three games, only one is on the road, where the Bods have had some troubles this season.

“We’ve struggled on the road this year,” said Keeley. “But we just need to keep working so that we can keep getting better and finish the season out strong.”

Coming off the three-game road skid, the Bods are right in the middle of an MIAA logjam. Nebraska-Omaha, Emporia State and Washburn each have nine wins, while Missouri Western has eight and Missouri Southern has seven.

As usual, the conference tournament seeding will come down to the final week and the Bods have a chanced to be anywhere from No. 3 to No. 8 in the Kansas City field.

Fortunately for Washburn, they hold their own fate, with Thursday’s game against Missouri Western and the season finale against Emporia State next Wednesday.