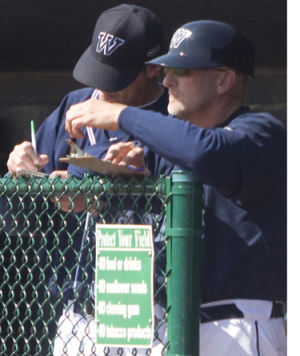 While Washburn students went home for the break, the Ichabod baseball team stayed in Topeka, won six of nine games at Falley Field and achieved something the team hadn’t done in nearly three years.

That feat, a four-game sweep of MIAA opponent Northwest Missouri this past weekend, was the first sweep for the Bods against one team since April 2006.

The series sweep began Friday with a 7-2 victory as Washburn’s Brett Sorenson went 4-for-4 with 5 RBIs and pitcher Curtis Hamilton improved to 3-0 with a complete game, allowing two earned runs.

“They got themselves out really,” said Hamilton, who has a 1.80 ERA in six appearances. “I mean not a lot of strikeouts. My infield has been doing real good, getting a lot of groundouts and they’re making plays for me.”

The Ichabods won the night-cap with a 4-2 victory that saw two RBIs from Wes Joy and two hits from Vicente Vieyra. The Bods’ Danny Cook went seven innings, allowing only two earned runs and picking up his third win.

The Ichabod domination continued Saturday as the Bearcats were held to one run in 16 innings, losing 6-1 and 5-0.

“It was a great weekend for us,” said Sorenson.” All of the pitchers pitched amazing.”

In the first game, the Ichabods scored five of their six runs off Bearcat errors, as Thomas Holliday had two hits with a run and an RBI while Washburn pitcher Joel Ricketts went six innings, allowing just five hits and no runs.

Saturday’s second game featured two more hits and four more RBIs from Holliday, while Brian Gorges added three hits, a run and a RBI. Andrew Miller had a complete game, four-hit shutout and earned his second win. The Ichabod victory ended a 13-game streak in which the Bearcats had not been shutout.

“That’s real nice,” said Hamilton. “A shutout of a good team any time is exciting. It’s the energy our team needs to get on a winning streak so we can keep this going.”

The Bods’ victories were in part fueled by a team meeting the group had Thursday morning after their loss to non-conference opponent Rockhurst.

In that game on Wednesday afternoon, the Ichabods fell to Rockhurst 6-3. After leading 2-1, the Bods’ Sorenson was tagged for four runs on five hits in the top of the third, giving the Hawks the lead for good and Sorenson the loss.

“Coach [Steve Anson] was pretty upset about the loss to Rockhurst,” said Clark. “He called us in. We had a meeting and everything. That got us fired up and ready to play this weekend. Our pitchers shoved it against the other team. We played great defense, hit the ball, scored runs when we needed to and basically that was it.”

The Ichabods’ spring break began against MIAA foe Missouri Western as the Ichabods split the weekend series winning the first and last game.

The series opener against the Griffons began with a 2-0 Ichabod victory thanks to two costly Western errors and a seven inning complete game by Hamilton.

The Griffons responded, beating Washburn 7-4 in the night cap before taking the early game Saturday 7-2. Washburn never led in either game.

The Ichabods were able to salvage the weekend, winning game four 7-6 after trailing by four early. Ricketts earned the victory, allowing five runs on five hits in five innings.

In the Western series, Washburn’s Holliday went 4-for-10 with one run and three RBIs, while Brian Gorges went 4-for-11 with a RBI.

“It’s real big. We needed to get back up in the standings,” said Miller. “We lost two early to [Southwest] Baptist, didn’t play very good. We started to play good this weekend.”

Up next for Washburn is a 2 p.m. home game Tuesday against Wayne State before a weekend showdown against No. 5 Emporia State. It begins at 5 p.m. Friday in Topeka with a nine-inning contest before heading to Emporia for two seven-inning games beginning at 2 p.m. on Saturday. The four-game series wraps up at 2 p.m. on Sunday back at Falley Field.

“Hopefully we can take four from [Emporia] just like we took four from Northwest,” said Sorenson.