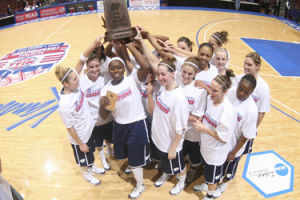 Postseason success and Washburn Lady Blues basketball have become synonymous over the last decade, and this year’s team is no different.

“It’s not like our record is terrible in the regular season,” said Hope Gregory, sophomore guard who helped lead the Lady Blues to a 23-4 regular season record. “Coach [Ron McHenry] has really done a good job of preparing of us during the season getting us ready for the postseason.”

Last weekend in the 2009 MIAA Championship Tournament, the No. 11 Lady Blues picked up three big wins and secured a spot in the NCAA Division II South Central Regional Tournament by winning the conference championship for the fifth time in the last seven years.

The 78-69 win in Municipal Auditorium was the second in the past two weeks for the Blues against the top-seeded Hornets.

The Blues took command of the game at the start and finish, opening the contest with a 16-4 lead, and hitting 17-of-21 free throws in the final six minutes to put it away.

Janice Bright, the senior guard who has led the team all season, had 25 points and 12 rebounds in the championship to earn tournament MVP honors.

Brette Ulsaker, a junior guard, joined Bright on the all-tournament team with 14 points in the Turnpike Tussle’s third installment.

The region’s games will be hosted by top-seeded West Texas A&M on Friday, Saturday and next Monday.

From the very beginning of the weekend’s conference tournament, the Blues showed why they’re always a force in March.

After a nine-day layoff since their first win against Emporia, the Blues came out of the gates strong to throttle Fort Hays State 73-46.

While the game was in range for the Tigers all through the first half, with an intermission score of 31-29 Washburn, it was poor shooting for Hays that ultimately spelled defeat.

The Lady Blues defense held the Tigers to 3-for-31 (9.7 percent) shooting from the field in the second half, including 1-for-15 from 3-point range. Fort Hays had just one field goal in the first 18 minutes of the second half.

“Hays has some nice shooters, and we knew that,” said Bright, a senior guard who had two steals and two blocks. “We just had to buckle down and guard them. We kind of switched up our defense on them a little bit. When you get a team back on their heels and make them take some quick shots, and we got them to miss a little bit, we were able to get out and run on them.”

The Lady Blues never trailed after halftime, going on a 30-6 run to open up the first 10 minutes of the period. Their lead increased to as many as 30 points, while still shooting a stellar 51.9 percent from the field.

Bright led the Lady Blues in scoring with 15 of a game-high 20, while key senior bench players Stanecia Graham and Karla Tailele scored 12 and 11 respectively, helping to outscore the Hays bench 31-0.

The Lady Blues went 3-0 against the Tigers on the year, while the victory Friday ended Hays’ season.

The Blues did much of the same Saturday evening in the semifinals as they defeated Pittsburg State 83-64.

Leading 36-30 at the half, the Lady Blues never trailed in the game, leading by as much as 25 at one point in the second half.

“In the second half, we kind of just broke the game open and pulled away from them,” said Bright. “We played really good.”

Bench scoring was a key factor again as Washburn outscored Pittsburg 39-12, including 19 points from Graham and 11 from Tailele. Senior starter Kalee Silovsky also pitched in 13.

The victory was payback for the heartbreak two weeks earlier when the Gorillas hampered the Lady Blues’ chance at winning a regular season conference title with a 94-87 three overtime win in Pittsburg.

“It always feels good to come back and beat a team that beat you,” said Bright, who scored 11 points. “The next time that you play the team that beat you, you always have that in the back of your head that they beat you. We just wanted to come out and redeem ourselves from the triple overtime loss and that’s what we came out and did.”

After getting revenge on a pair of teams that beat the Blues in the regular season, the team sets its sight on an even bigger prize.

When the season first started, there was talk of the Blues shooting for the Elite Eight in San Antonio. After winning 12 of their last 13, it appears the Blues may be primed for a deep tournament run in Texas.

“Just to win,” Gregory said. “Take each game one at a time. That’s our ultimate goal anyways. Go down there, work hard and try to get wins.”