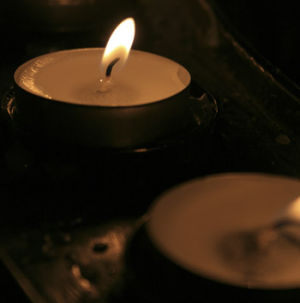 As the bell tower rang nine times to signal the time on a frigid Wednesday night, candles were lit in honor of those who have lost their lives or suffered tragic injuries because of alcohol-related incidents.

About 50 students attended the candlelight vigil sponsored by the Washburn Student Government Association and Bods Against Destructive Decisions.

In honor of Alcohol Awareness Week at Washburn, March 11 was designated to be a day for people to speak out about their traumatic experiences with alcohol. As students arrived, they were greeted by piano music. Attendees were encouraged to sign a book with their names and thoughts to help ease their pain.

“It was pretty solemn,” said Angel Romero, WSGA chief of staff. “I think especially with Ben Muir’s death being so recent, it was on the forefront of people’s minds.”

According to the Center for Disease Control and Prevention Web site, almost one third of automobile accidents are alcohol-related, so safe drinking isn’t something being taught to enough drinkers.

The vigil was emotional. Many people were crying and they received hugs and words of comfort from their friends. Counselors were also on hand to help people cope with their emotions. The counselors encouraged people who were negatively affected by alcohol to speak out about their experiences.

“I think it can be really therapeutic and really helpful,” said Romero. “It lets people know they’re not alone.”

“I don’t know where else anyone could come together and identify on these issues,” said Philippi.

After the vigil, many of the attendees went to a lobby in the Student Union to share the company of others who had been through similar experiences. At first, people were reluctant to speak to each other about such painful memories, and the room remained silent for some time.

“If someone is having trouble talking about it or coping with it, I encourage speaking with loved ones or friends who knew the individual who suffered from the incident,” said Bergmann. “Remember and talk about the good times you had with that individual rather than remembering the incident.”

As the evening drew to an end, many people who attended the vigil walked away with better understanding of how alcohol use and abuse can affect themselves and others. However, it shouldn’t take a tragic accident for that to take place.