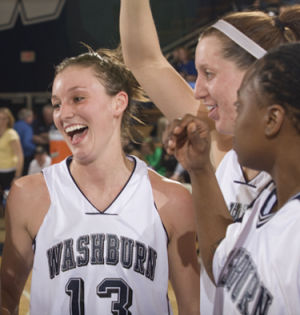 The Washburn Lady Blues had an eventful week. After a crushing triple overtime loss to Pittsburg State nine days ago, Washburn finished its regular season with a victory against rival Emporia State, 87-74 during Senior Night Wednesday in Lee Arena.

However, the helpless Lady Blues watched their chances of winning the MIAA slip away Saturday as the Hornets topped Fort Hays State to earn their 17th conference win and the regular season title.

The Lady Blues (23-4, 16-4) earned the No. 2 seed in the MIAA Basketball Championship Tournament held Friday through Sunday in Municipal Auditorium in Kansas City, Mo. Washburn will take on No. 7 seed Hays at 6 p.m. on Friday.

“Every game is obviously going to be huge, but they have a lot of shooters on that team and so we can’t let them keep their heads up,” said Hope Gregory, sophomore guard. “We don’t want to get caught up in an early loss so we definitely have to go into the game prepared and ready to stop their shooters.”

The winner of that game plays in the second semifinal game at 8:15 p.m. on Saturday.

Washburn lost in the second round of last year’s MIAA tournament to Northwest Missouri and is looking to hang around a little longer this year.

“I think it’s going to be important that we come in to the conference tournament looking for a win to play through Sunday and get a win,” said Gregory, who is averaging 19.4 minutes and 5.5 points on the season. “So I think it’s important that we focus on every single game as much as the championship game.”

The Lady Blues’ four losses this season have all come against teams in the top five of the MIAA and have only been by a total of 17 points.

“We know the games we’ve lost: two in overtime and one by one,” said Gregory. “And then Emporia we lost by seven or eight. So if you took just a couple of points here and there, we could be looking at it like we could have just lost one game.”

While the winner of the MIAA Tournament earns an automatic berth into the Division II South Central Region, the top eight teams ranked in the region also continue their season.

Washburn sits at sixth in the region rankings. Currently, the only other MIAA team is Emporia State, in fourth. And while the most recent rankings do not include the Lady Blues’ win over the Hornets, the MIAA tournament will determine Washburn’s postseason future.

In the Senior Night game between two nationally ranked teams, the No. 13 Lady Blues handled the No. 5 Hornets with the help of 28 points by senior Stanecia Graham and 19 by senior Janice Bright.

Graham played her best two games of the season, scoring 31 in the loss at Pittsburg and nearly reaching the 30-point mark again in just 21 minutes of action against the Hornets.

Bright helped out on the boards, grabbing a career-high nine rebounds in her final game at Lee Arena.

Washburn jumped out to a 12-point lead late in the first half, but Emporia cut it down to seven with a 43-36 halftime score. The Hornets also were able to get within 3 points with 4:35 left in the game before the Lady Blues went on an 11-2 run that secured the win.

“We played so much better overall defense than we did down [in Emporia],” said Gregory.

The victory was payback for Emporia’s win in the Turnpike Tussle earlier in the season when they handed Washburn their largest defeat of the season, 85-78. In the last six meetings, the Lady Blues have won five.

The Washburn women also continued their hot streak in Lee Arena, earning their seventh win in their last eight games at home against the Emporia women. It was the 14th home win on the season for the Lady Blues, whose only loss in Topeka came back in January to Central Missouri in a 79-77 overtime loss.

For Washburn, the goal is to make the most of the week of practice and to make the postseason last as long as possible.

“We have to work hard in the conference tournament and try and take care of business,” said Gregory.