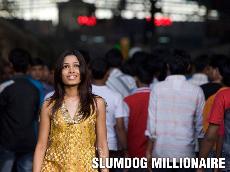 Walking out of theater after the end of “Slumdog Millionaire,” I was relieved that, after sifting through Oscar nominees, I had finally found one I could actually wholeheartedly recommend to anyone instead of some gut-wrenchingly beautiful film that somehow leaves you feeling terrible by the time you walk out.

“Slumdog Millionaire” is the story of how an uneducated boy serving tea for a telemarketing company managed to get so far answering questions that have stumped much smarter people. Suspected of cheating, Jamal K. Malik, played by Dev Patel is brought in for police questioning. And by questioning, they mean beating. After a failed attempt to beat the answers out of him, they finally sit the boy down and ask him how he got so far.

He responds simply, “I knew the answers.”

Jamal then begins to explain his remarkable life story, using each question as a starting point. The story brutally portrays his life beginning somewhere around 5 or 6 years old when, after being locked in an outhouse by his brother, Jamal drops through the hole in the bottom to get a chance to see a visiting action star and get his autograph.

I wish I could tell you that running through a crowd of people completely and totally covered in the most vile smelling collection of people’s waste only to have his autograph sold off by his brother for food was the worst thing that happened to him, but it’s actually one of the lesser misfortunes of his life.

What makes this story distinct to me is the structure of conflict, because while his lot in life is unquestionably unfortunate, it does seem to gradually get more bearable instead of the standard arch of drama. At around the age of 6 or 7 the orphan is forced to leave his best friend after narrowly escaping from a man about to remove his eyes with a hot spoon because “blind beggars earn double,” but from there he becomes a con-artist tour guide, filling tourists’ heads with facts he pulls from thin air while other kids steal the tires from their car. And when he gives that up he winds up serving tea for telemarketers.

Still, the genuinely honest disregard for the money he keeps making is what really sells his story. The fact that the only reason he keeps going is because the love of his life, the girl who was left behind when he ran away, might be watching. While the film’s message is tired and predictable, the story built behind it is powerful enough to actually make it seem original.

The ending credits, I have to mention, were the most random and seemingly out of place addition to a movie I’ve ever seen and I recoiled when they first started, but by the end I was almost laughing at the break in tension and I realized it was a way to leave the moviegoers with something to smile about without interrupting the story.