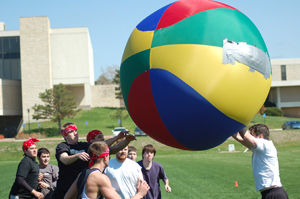 Earth once again makes its way to Washburn University as the Delta Chi Fraternity hosts their second annual Earthball tournament.

The game, which thrives amidst relative obscurity, has a varying number of stories related to its origin.

Some say the game was started by a couple of hippies who thought it would be cool to toss around an oversized beach ball, while others believe that President Nixon’s Earth Day celebration essentially gave life to a new sport in an attempt to commemorate the day’s festivities.

Whatever the case may be, today the game is normally associated with charitable intentions, much like what the Delta Chi Fraternity has been doing for the past two years.

The game itself is played with two teams, comprised of 6-10 members per team. The objective is to push a six-foot-tall ball the length of the field and over the opponents’ touch-line, which is located at either end of the field.

This year’s tournament is scheduled for 10 a.m. on April 4 on the union lawn. Everybody from Washburn can show their support for the foundation and participate in the worthy cause. The price per team is $45 before April 1 and $55 per team after, which includes team entry, rewards for division winners, juice, donuts and T-shirts for each player.

All proceeds will go to the Jimmy V Foundation for cancer research. Jim Valvano, who was an extremely accomplished basketball coach and public figure, died in 1993 of cancer. Perhaps the most important of all his accomplishments is the tremendous effort he put into awareness of cancer-related issues towards the later stages of his life.

“It’s really a great cause and a good time,” said junior Will Lawrence, public relations chair for Delta Chi. “You can get any organization, any group of friends together and start a team to raise money and just have some fun.”

Delta Chi, whose national philanthropy is the Jimmy V Foundation, raises tens of thousands of dollars every year internationally through events similar to what the Washburn Chapter has done the past two years.

Last year’s tournament, which was the first of its kind on Washburn’s campus, didn’t garner the kind of support that its hosts thought it would, but this year’s, with verbal commitments from several student organizations on campus, hopes to be bigger and better, and garner the kind of support that will do justice to the foundation that stands to benefit.

“Hopefully people are intrigued and want to try it out,” said Lawrence. “So far the response has been great so we hope that this year we have enough teams so that we have a men’s and a women’s division.”

Entry forms can be picked up at the Earthball table in the union this week, and turned into the SAGL office in the union basement.