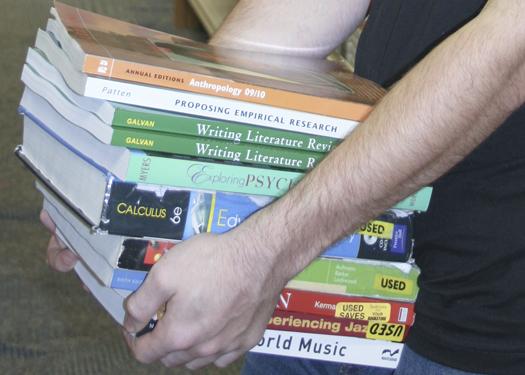 The Washburn Bookstore is considering a textbook rental program at Washburn next fall, and price reduction would be a big deal for students with tight budgets.

Garrett Love, Washburn Student Government Association presidential candidate, is one of the students who has been advocating for a textbook rental program. Three years ago, when he was a freshman, he started his own business, Love Book Sales. He’s now hoping to make his idea a university-wide program. Kay Farley, director of the Washburn Bookstore, has also been considering the idea for the past several years.

“When Garrett came and talked to us, we said that it was something we’d been thinking about looking into, and that we’d be happy to work with him,” said Farley.

Love saw the possibility of getting the University involved as a huge step.

“In order to reach the most students, it wasn’t going to be through Love Book Sales or some small program like that,” said Love. “Washburn Bookstore is going to be the one to work with. I want all the money to go back to Washburn.”

The program would allow students to buy textbooks at lower prices, at nearly half price. At the end of the semester, students would return their textbooks. There would be no refund, but the overall price paid would be cheaper. Additionally, students who desired to buy the textbooks and then sell them back could still do it.

“You don’t have to rent the textbooks,” said Love. “We just want to present options because that’s basically what my Love Book Sales program was; a cheaper alternative. Giving [students] options is something we’re excited about.”

If the program becomes reality, students shouldn’t expect all books to be immediately available for rent. It will take some time.

“One of the schools we talked with, Cal-State Fullerton, has been doing [textbook rental] for four years, and they have 35 titles,” said Farley. “So it’s not exactly a fast process.

Students who are slow about selling their books back get less money for them. That is where the textbook rental program becomes most beneficial. Because there’s no urgency getting the books right back to the bookstore.

There are still a lot of problems that will need to be worked out before textbook rental is a realistic possibility, but the program might eventually become a reality.

One of the things we’ll do now is send out surveys to the schools we know who have textbook rental programs to gather information on how they function,” said Farley. “We like to learn from others about how they’ve been successful and the challenges they’ve had with the program.”

What it comes down to for both Love and Farley is that textbooks are a huge expense for students.

“Some universities main bookstores are completely rental-based and are seeing a lot of success,” said Love. “A lot of Missouri schools are doing it. In approaching them, that was the main angle, and that’s what we wanted to push for with the bookstore.”