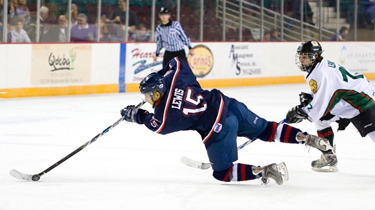 Washburn’s Night with the Topeka RoadRunners provided students with an evening of intense hockey entertainment, and the RoadRunners with a key win for the season.

With a 3-0 shutout over the Kenai River Brown Bears, the RoadRunners moved into a first place tie with the St. Louis Bandits for the NAHL South Division and clenched a berth in the playoffs.

In the game’s first period, Edgars Lipsbergs made a pass to Matt Hartmann on a 2-on-1 break where he shot the puck to give the RoadRunners a 1-0 lead. The RoadRunners maintained the lead through the first period despite being outshot by Kenai River 13-10.

Topeka increased their lead in the second period to 2-0 after Travis Stevens scored a goal from a pass assisted by Jacob Poe. The RoadRunners turned the game around this period, outshooting their opponents 14-2.

In the final period, the RoadRunners kept up their momentum by outshooting the Brown Bears 16-8 and moving their lead to 3-0 after a shot from Lipsbergs, assisted by Stevens and Hartmann. The win moved Topeka to 38-7-4 overall as they gear up to play the Alaska Avalanche this week.

Throughout the regular season, the RoadRunners play 58 games and are on the road every other weekend, so for the players, coming home to a supportive crowd in Topeka is important. Each individual is playing for the chance to receive college scholarships, so having the support from other college students motivates the players.

“It’s better to have a crowd around our age because it adds to the atmosphere,” said Eric Artman, defensive player for the RoadRunners. “Usually college students have great support for us, so it’s great when they come here to watch us.”

Caleb Wolfgram, RoadRunner defensive player, also enjoys having college players attend the games because he finds that it is easy for players and students to relate to one another and creates a greater experience for everyone.

Washburn students also had a good time at the event and showed their appreciation for everything the RoadRunners do for Topeka.

“I thought it was a really great game, and I had fun,” said Caley Onek, sophomore business marketing major. “It’s good that the RoadRunners pay such a big contribution to our community. I wish that Washburn could get more involved in Topeka because it creates a better sense of community.”

Phil Norris, senior anthropology major, also thinks that the Puckabod event is a great way for students to get involved in Topeka.

“I think it was a good event, and I wish I had seen more Washburn students out there, but it was still a great game,” he said.