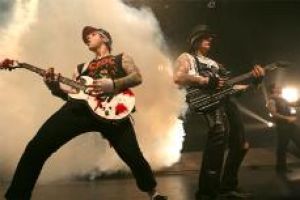 Rock fans won’t have to leave Topeka to hear some of the hottest bands on Saturday night.

Buckcherry, Avenged Sevenfold, Papa Roach and a special guest will rock the Kansas Expocentre on April 4 at the Expocentre.

Buckcherry, best known for their hit songs “Crazy Bitch” and “Sorry,” are touring in support of their latest release, “Black Butterfly.”

Avenged Sevenfold, a metalcore band from Huntington Beach, Calif., has ruled the rock charts with hits like “Bat Country” and “Almost Easy.”

Papa Roach rounds out the bill with hits including “Last Resort,” “Scars” and “Lifeline.”

Contemporary rock tours of this caliber rarely come to Topeka, despite the fact that Topeka is home to the Kansas Expocentre with Landon Arena.

“It’s actually kind of a coup for Topeka,” said Phil Thompson, marketing manager for the Expocentre. “It represents a trend in the industry that a lot of artists are playing smaller venues.”

Landon Arena’s configuration of this concert will have a capacity of 7,100.

Recently, the Expocentre has seen a fury of activity. This week alone, Landon Arena will host the Kansas Folkstyle Wrestling Championships, Harlem Globetrotters and Taste of Home Cooking School.

The Topeka Roadrunners hockey team are scheduled to play the nights before and after the concert. The Expocentre must cover the ice with insulated panels before the stage can be constructed, between 10 p.m. on April 4 and the arrival of the tour crew the next morning at 8 a.m.

“People are always looking for rock bands,” said Thompson. “Well, here we’ve got four of them.”