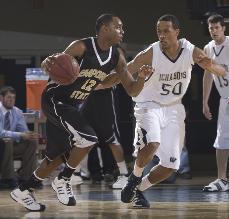 Moores problems James Williams and the Ichabods had a hard time stopping Emporia State's Robert Moores, allowing the guard to score 21 and lead the Hornets to a win.

With all the hype and postseason implications in last Wednesday’s Washburn-Emporia State game, the match up could be called “the Thrilla in Lee Arena.”

However, after all the build up, the end result was anything but a “thrilla”. The Bods lost 78-63 to their most hated rivals on Senior Night to add misery to an already bitter defeat.

Coming into the game, Washburn had a 2-game winning streak and a size advantage that figured to be beneficial, but once again the Bods were unable to capitalize on those advantages.

Out of the gates, the Hornets erased any doubt from the minds of the spectators as to who was the better team that night. At the halftime buzzer, Emporia led with a score of 41-29, shooting a staggering 50 percent of their shots. In what sounded like a horrible prank, Emporia shot 15 of 30 from the field and 7 for 14 from the 3-point stripe.

With this level of efficiency on the offensive end of the floor by the Hornets, Washburn would have to pull of nothing short of a miracle to erase the 12-point hole they found themselves in.

In what has become a redundant theme, Washburn came back from the halftime break and made a valiant effort to cut the lead to just 3 points, but could get no further, and in a disappointing note lost the biggest rivalry game of the year to Emporia State.

The Bods trailed by 11 with 14:42 remaining in the second half, but Washburn went on a 20-4 run that spanned more than eight minutes to make it a single possession game.

Senior Paul Byers finished the last game he’ll ever play in Lee Arena with a game-high 17 points, pushing his career total points scored in a Washburn uniform to 809 points.

Byers also led the team with a game-high eight rebounds. James Williams, also in his last game in Petro, finished with 14 points of his own.

Despite a solid offensive outing, the Bods had trouble guarding Emporia’s talented trio, allowing Jeremiah Box, Robert Moores and Lamar Wilbern to combine for 61 of the Hornets’ 78 points.

“Some of the guys really took it to heart.”

Senior Darnell Kimble played just eight minutes and threw his jersey onto the court in the game’s closing seconds.

The forward was dismissed from the team, making the postseason that much more difficult for Washburn.

The Bods dropped to sixth in the final MIAA standings with the loss, setting up another rematch with the No. 3 seeded Hornets in the first round of the conference tournament.

The game will be played at 8:15 p.m. on Thursday in Municipal Auditorium in Kansas City, Mo.

Based on the past two meetings between these teams, Washburn will have to dig deep into their bag of tricks to get this win.

But if the sting of the loss at home still resonates in the mind of the players, Washburn will emerge victorious and make a deep run in the post season.

The loss of Kimble will hurt the team on the boards, as well as front-court depth, but the players remain optimistic about the rubber match against the in-state rivals.

“We’re implementing some new plays in order to give Emporia some offensive and defensive looks that they haven’t seen in the first two meetings,” said DeCoteau. “So it should be an interesting matchup.”