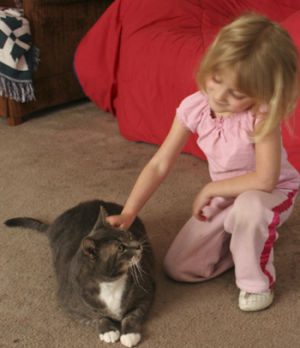 In terms of rescuing strays, Lee Boyd, biology professor, and others in the biology department, have proven to be the cat’s meow.

Renovations on the Stoffer science building that began in May 2007 made it necessary to find new space for the biology department, so it was relocated to the Washburn Place apartments, where many Washburn students live. Shortly thereafter, Boyd discovered a community of feral cats squatting in the area. She said she decided to catch them.

“We started putting out food,” she said, “and after a while we saw them mating, so they obviously had not been neutered.”

In an effort to stop the chaotic feline frenzy, Boyd said she contacted the Cat Association of Topeka to get advice on what to do. The people at CAT advocated a trap, neuter and return program.

Boyd initially trapped nine cats and had all of them neutered; a mass surgery that ended up costing her about $1,000.

Three of the nine cats were given homes right away. Boyd adopted Hal, a black cat, who now lives in Boyd’s closet and is only enticed to come out with the prospect of food. Wendy Stafford, secretary, adopted Callie, a cat appropriately named for her calico color.

“She’s the most adorable cat,” said Stafford. “She adapted very well. I have another cat that’s older by three or four years, and they get along great.”

Then there was Chester, a charismatic tomcat named after the Cheshire cat in Charles Lutwidge’s “Alice’s Adventures in Wonderland.”

“He was so skinny,” said Boyd, “He weighed about 5 pounds with only two teeth in his head, but he could suck in food perfectly well.”

Chester was diagnosed as having FIV, the feline equivalent of HIV, which is not dangerous to humans.

“We couldn’t adopt him to a house with other cats, so we thought maybe he could be an office cat,” said Boyd.

So Chester took up residence in the biology department’s offices, where he competed with employees for the use of chairs and keyboards. Eventually, Chester was adopted by Paul and Tracy Wagner, assistant biology professors. Paul Wagner said his daughters have benefited the most from having Chester around.

“My sister is the one who feeds him, and I clean his litter box out,” she said.

Chester now weighs 15 pounds and will soon have his two teeth removed at a dentist’s suggestion.

In January 2008, the biology department moved back into Stoffer, but Boyd continued to check in on the cats and feed them. Apparently someone didn’t think it was a good idea.

“Right before Christmas I got an official letter from Washburn that said I had been seen feeding the cats and should basically cease and desist,” said Boyd.

After talking to the landlord, however, Boyd was permitted to catch and release the remaining cats. Since then, many of the strays have been given new lives, in addition to their nine.