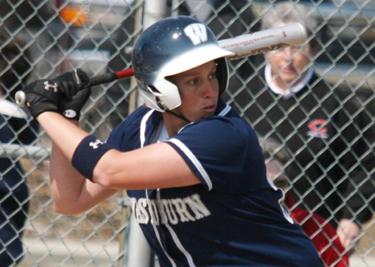 The homerun is one of the most thrilling acts a fan can see at a softball or baseball game. And for Washburn’s Dani White, hitting homeruns never gets old.

“You can definitely kind of feel it when you’re swinging,” said White, senior first basemen. “And then to just round first and see it’s over, it’s almost like a relief and an instant burst of energy. Then, when you round that base and coach is smiling, you give her a pound. And then the round home, I mean nothing’s better.”

White is third on the all-time home run list with 34, behind only teammate junior Tish Williams, who has 35, and former Lady Blue Brooke DeVader, who has 38.

But White does more than just hit homeruns. According to Williams, she is a spark and a team leader.

“My favorite thing about her is how mature she is,” said Williams. “We have a lot of crazy characters on this team. And she keeps everybody in line. And she’s always being positive to people that are down.”

Dani White is from Berryton and went to Shawnee Heights High School where she excelled playing softball.

And with Washburn University being near family, plus the close relationship White had with head coach Lisa Carey, Washburn was an easy choice.

She began her career as a Lady Blue in the fall of 2005 on a bad note.

She tore her ACL during the fall season and had to sit out her freshman campaign. White was redshirted and that’s when her career began to take off, making a big impact on the team’s success ever since.

White is an advertising major in the mass media department and plans to graduate in May. She’s done an internship with the Kansas City T-Bones in the ticket and sales department and is looking to pursue a career in sports advertising.

White has many great memories from her five years on the softball team. One that she said stood out was in 2006 at a Northwest Missouri tournament versus Minnesota State-Mankato. The Lady Blues scored six runs in the top of the seventh off of four homeruns to come back from a 7-4 deficit to beat Mankato 10-9. In that game, the Lady Blues set a school record with six homeruns.

“I would say one of the best games I’ve played in is Mankato,” said White. “Brooke [DeVader] and I both had two homeruns in it. And I believe they were both back-to-back homeruns. So it was a blast playing in that one.”

In White’s career, she has earned numerous honors and awards and has put her stamp on the Washburn record books.

An example of this is the career RBI list where she currently sits in second with 124, right behind DeVader, who has 141. She is also second in total bases to DeVader and has a career batting average of .308.

“She’s a big tool to us when it comes to playing,” said Williams, who is fifth on the list with 112. “She’s positive all the time, so when she’s up to bat, we definitely need her especially when we have a runner at third and second. We all feel positive she will do her job.”

White likes the honors and awards but says they are not why she plays the game. And while she has been a part of the only two teams to go to the North Central Regional in 2006 and 2008, she’s hoping this year’s team can go even further.

“I’ve had a lot of individual awards and those are always great,” said White. “But in the end, it’s what the team does, so my goal is definitely do what I can to help the team start winning, and get to the regional and the MIAA tournament. Because the individual awards, they’re nice to have, but at the end of the season, they don’t help your win record or where the team goes.”