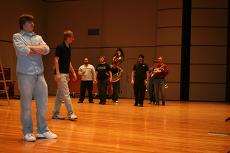 Hoedown The WU Opera will be taking place April 3 and 4 in White Concert Hall. The show begins at 7

Opera lovers will get the chance to hear some classics when students from the Washburn University music department perform scenes from Verdi’s “Falstaff” and Rossini’s “The Barber of Seville” at 7:30 p.m. on April 3 and 4 in White Concert Hall.

This marks the fourth year for the WU Opera. Lori Meador, office administrative in the music department, has seen rehearsals for the show, and she said it will be exciting this year.

“The costumes are extensive,” said Meador.

Ivalah Allen, music adjunct at Washburn, will direct the scenes from “Falstaff.” Allen has performed in several operas, and she has been featured in such roles as Mimi in “La Boheme,” Donna Elvira in “Don Giovanni” and Blanche in “Dialogues of the Carmelites.”

Pat Gibson will be the accompanist for both works.

The event is open to the public. General admission is $8. Admission is $4 for seniors, and free for students who present their Washburn ID cards. For more information about the WU Opera, call 785-670-1511.