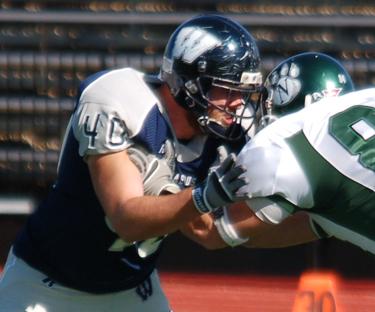 Ben Muir, a junior defensive end for the Washburn football team, died Saturday morning as the result of a single-vehicle wreck.

Muir was found injured in his vehicle at 7:45 a.m. near the intersection of S.W. 93rd and Auburn, and was taken to Stormont-Vail by ambulance.

Although Muir was concious and responded to paramedics when they found him, he passed away at the hospital later that day.

Muir, a senior physical education major from Belton, Mo., was driving by himself south of Topeka when the accident occured. The cause of the crash is still under investigation.

Brad Haug, a sophomore fullback on the football team, was a close friend of Muir’s and lived with him as a freshman in the residence halls.

“I’ve known him for five years,” said Haug. “He was a hard worker, always working hard, making money. It was the same on the field, always a hard-hitting kid. He gave all he had all the time.”

Haug was not at the hospital until after Muir’s death, but he said relatives had arrived earlier, including Muir’s mother and grandmother.

“I’m not exactly sure of all the details,” Haug said. “But I’m told it was a laceration on one of his arteries. He was talking to the doctors just fine, and they saw there was a severed artery. They just didn’t have time to fix it.”

Muir had one year of eligibility left for the Ichabods, and started eight games last season after recovering from a knee injury and switching positions.

“His main goal was always to help the team out,” said Haug. “He came back strong from his injury, and then got moved to D-line. It was all for the team.”

Although Muir will be missed on the football field, players and coaches alike say it is his character and good-natured attitude they will miss the most.

“Our coaches and players are very saddened by the news,” said Craig Schurig. “Our thoughts and prayers are with his family. Ben was an outstanding young person and the ultimate teammate and did everything he could do for the team. He was a great young man to his family and his teammates. He will be missed.”