Bods pull off first round upset, lose in MIAA semis 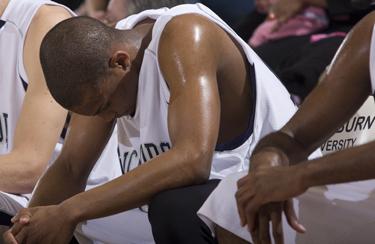 Freshman William McNeill and the Bods suffered a tough loss in the semifinals, but surprised the MIAA for a second consecutive year with a first round upset.

Washburn shocked the basketball world last Thursday and pulled off an upset against the Emporia State Hornets, a team that beat the Ichabods in their first two encounters.

Just when it seemed Emporia was about to sweep the season series against Washburn in the MIAA tournament’s first round, the Bods came back from an 11-point deficit to win 88-82.

Despite a stellar defensive effort by the Bods early in the game, Emporia State managed to put together play after play, and toward the end of the first half, they found themselves up by as many as 11.

A 3-point shot by Nate Daniels in the final minute of the first half cut the lead to 8, and Washburn went berserk in the second half, putting together an 18-8 run to tie the score at 53 with 11 minutes remaining.

The Hornets reclaimed a 5-point lead, but back-to-back buckets by freshman William McNeill tied the game once again and the Bods never looked back from there.

Senior guard DeAndre Eggins scored the team’s next 10 points, and the team hit seven of their last eight free throws to break open what had been a close game.

Eggins, an all-MIAA second team selection, and, all-MIAA honorable mention, Lekheythan Malone led the Bods in scoring with 20 points each.

“There was no way that we were going to allow our seniors to lose to Emporia State three times in the same season,” said McNeill. “So we went on the court with pride. We just knew that we had to win the game.”

The win over the Hornets gave the Ichabods a chance to play Central Missouri in the second round of play in the MIAA conference tournament.

On Saturday, the Washburn faithful watched in horror as the Ichabods’ Cinderella story came to a screeching halt against the No. 2-seeded UCM Mules in a 72-69 loss.

The overtime thriller was an up and down battle down to the very last whistle and saw several lead changes with no sign of letting up by either team.

Led by James Williams, senior, Washburn remained resilient after falling behind by 15 in the first half. Similar to the game before, WU battled back to tie the game with 11 minutes left. The Bods never surrendered their lead in regulation and led by as many as five.

The lead was at four with 23 seconds left, but UCM’s De’Andre Byrd hit four free throws to tie the game with six seconds on the clock. Byrd missed a game-winning jumper with two seconds left to put the game in overtime.

The teams were still tied with 2:21 left in overtime, but UCM scored six unanswered points to secure the win. Malone’s 3-pointer with two seconds on the clock made it a one possession game, but it was too little, too late for the Bods.

“We tried our hardest,” said DeCoteau. “But there were a couple of questionable calls that if they went the other way could have shifted the balance in our favor.”

In overtime, a couple of costly mistakes by WU and questionable calls would undo the impressive showing in regulation from the Ichabods.

“We just did some petty things to give the game way,” said McNeill. “Not boxing out and touch fouls gave them a bunch of free throws at the end of the game.”

Williams had a team-high 14 points, followed by Eggins, who added 13. Paul Byers had his first double-double of the season in his final game as an Ichabod, finishing with 11 points and 11 rebounds.

Although seniors Byers, Malone, Eggins and Williams will leave the team, a young, talented crop of underclassmen now carry on the hope that Washburn is in good hands.

Underclassmen McNeill, Logan Stutz and Nate Daniels are just some of the players that are returning, and if coach Bob Chipman and his staff can surround them with a strong recruiting class, then the Washburn Glory days could be fast approaching.

“I’m taking about two weeks off,” said McNeill. “After that its back to work to prepare for next season.”