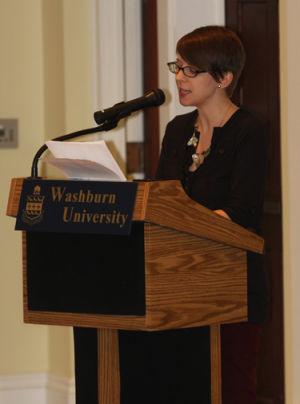 Author Kelly McMasters read from her book “Welcome to Shirley: A Memoir from an Atomic Town” at 7 p.m. on Wednesday night in the Bradbury Thompson Alumni Center.

During the reading, McMasters described moving with her family to Shirley, a working class town near Long Island, New York, when she was 5 years old. Although the town was poor, she said as an only child it was a wonderful place to grow up because there were so many families in her neighborhood with children her own age. Her parents had moved a lot before they settled in Shirley, and McMasters said she had never felt like she belonged anywhere.

“But after we moved to Shirley, I never again wished for brothers and sisters,” she said. “Anytime I wanted to be part of a larger family, I just walked out the front door and picked a direction.”

However, as McMasters grew older, she realized Shirley had a darker side. She witnessed an alarming number of Shirley residents developing breast, lung and thyroid cancers. McMasters researched Brookhaven National Laboratory, a top-secret nuclear research lab near Shirley, to learn more about the effects of hazardous waste that was released from the plant into Shirley’s nearby rivers and aquifers. McMasters recalled one report that employees at the plant had voiced concerns to their supervisors.

“When [the employees] questioned the risk of certain activities, they were told by their supervisors that ‘a little radiation won’t hurt you,'” she said.

After the book reading, McMasters discussed the circumstances leading up to “Welcome to Shirley.” She said that shortly before the book’s release, she became nervous about how it would be received by Shirley residents. As she drove through the town one day, it occurred to her it might be the last time she was welcome in Shirley.

“When you’re in your house, in your little room writing, that’s not what you’re thinking about,” she said.

But McMasters said her book has received a positive reception from residents of Shirley.

“I think mostly they were just happy to be seen,” she said. “I didn’t whitewash anything. The town is complicated, and it’s not pretty in a lot of ways, but I think the fact that I did talk about the other ways that it is pretty meant a lot.”

Jennifer Brayton, a Washburn student working toward a bachelor’s in integrated studies, attended McMasters’ book reading. Brayton, who was in the process of reading “Welcome to Shirley,” said it was interesting to learn more about McMasters’ book.

“She’s a really good writer,” said Brayton. “She shows a journalistic approach to writing. You can tell she did a lot of research.”

Brayton said she is especially fond of the parts in the book where McMasters describes the close-knit community of her childhood.

“Even though McMasters grew up near an atomic lab, she wrote about her happy memories, not just the sad ones,” said Brayton.