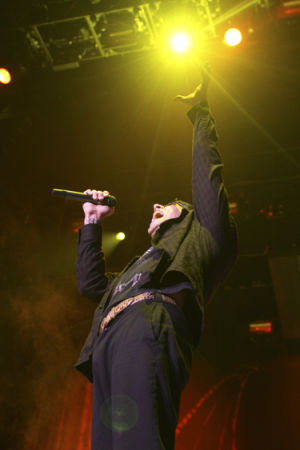 Topeka was treated to a night of metal during the weekend as four notable rock bands descended upon the capital city with a fury.

Rev Theory opened the night, after speculation as to who the secret guest band would be. Papa Roach, who hit the music scene in the ’90s with the rock classic “Last Resort,” was the next band to hit the stage, and was followed by Buckcherry.

“I’ve been waiting for almost two months for the concert,” said Emily Hewitt, freshman. “I really only came to see Buckcherry, but Papa Roach and Avenged Sevenfold were good, too.”

Avenged Sevenfold gained mass popularity with their song “Bat Country” and have since skyrocketed to fame with “Almost Easy” (featured on Rock Band 2) and the acoustic ballad “Dear God,” concluded the show with a bang, though a noticeable portion of the crowd left before their performance began.

“I was outside having a smoke after Buckcherry played their last song and I saw at least 100 people leaving and not even waiting to see the other bands,” said Hewitt.